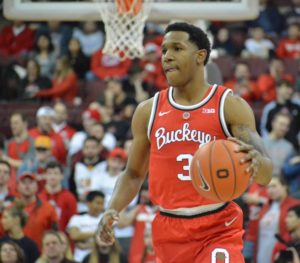 Ohio State got 22 points and eight rebounds from Kaleb Wesson for 63-49 victory over Northwestern at Value City Arena on Wednesday.

He was the lone player in double figures for the Buckeyes (17-9, 7-8 Big Ten), who had lost two straight and are considered a bubble team for the NCAA Tournament.

Most importantly, Wesson had one foul in 31 minutes and dished out four assists and had two blocks.

“I give a lot of credit to Kaleb,” OSU coach Chris Holtmann said. “I thought he had a really good approach in this game. He was really aggressive from the tip. He did a heck of a job with his aggressiveness on both ends.”

The Wildcats were within 42-38 when Jackson put OSU up 45-38 with a trey before going to the bench nine seconds later with his fourth foul. Kaleb Wesson nailed a three and made a shot in paint for a 50-40 lead with 8:24 remaining in the game in front of a turnout of 12,032.

Dererk Pardon ended the OSU with a basket out of a timeout, but Kyle Young’s short jumper and Kaleb Wesson’s dunk off a pass by Duane Washington Jr. made f or a 54-40 margin with 7:07 left.

Anthony Gaines made it 54-42 after he stole the ball Keyshawn Woods had five of seven straight OSU points for a 61-42 lead with 3:56 left.

Ohio State shot 46.3 percent from the floor despite making 4 of 20 (20.0 percent) 3-pointers. The Buckeyes had 18 assists on 25 field goals and committed eight turnovers.

The Buckeyes, who didn’t make a bucket the final 7:42 against Michigan State on Sunday – missing their final 10 shots in a 62-44 loss – didn’t fare much better in the opening seven minutes of the game vs. Northwestern but fortunately for them the Wildcats were just as bad.

The teams combined to make 2 of their first 19 shots and missed all nine tries from beyond the arc until Washington canned a triple with 12:39 left to give the Buckeyes a 5-3 lead.

Despite the poor shooting, the Buckeyes led 14-8 before Northwestern ran off six straight points. Kaleb Wesson scored five consecutive points to give Ohio State a 19-14 advantage before A.J. Turner stopped the run with a field goal.

Andre Wesson scored three straight for a 22-16 lead and Turner responded with a bucket. Kaleb Wesson made a pair of foul shots for the Buckeyes’ final points as they went the last 2:50 without a field goal. Law’s jumper pulled Northwestern to within four with 34 seconds left.

The Buckeyes received a scare when Andre Wesson left the game with 1:23 remaining in the first half. He suffered an elbow contusion but was able to return for the second half and finished with seven points in the 31 minutes.