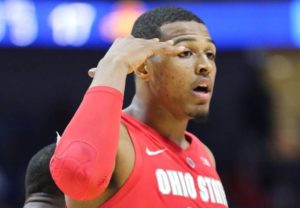 Kaleb Wesson, a junior forward for Ohio State, was named to the 2019-20 Preseason All-Big Ten Team via unanimous decision, the conference announced Sept. 2.

A panel of media voters from across the conference voted on the 10-member squad, and Wesson was just one of only three players unanimously selected to the 2019-20 preseason squad.

Starting as a true freshman in 2017-18, Wesson posted 10.2 points and 4.9 boards per contest, while shooting 56.2 percent from the field. He earned All-Big Ten Freshman honors for his performance.

The Buckeyes open the regular season at 8:30 p.m. on Nov. 6 against Cincinnati in Value City Arena after an exhibition with Cedarville on Oct. 30.

Ohio State also faces Villanova at home, North Carolina on the road and both Kentucky and West Virginia on neutral courts in nonconference play along with the 20-game Big Ten schedule.

Head coach Chris Holtmann and Wesson enter their third season at Ohio State after a pair of 20-win seasons along with second-round appearances in the NCAA Tournament each of the past two seasons.