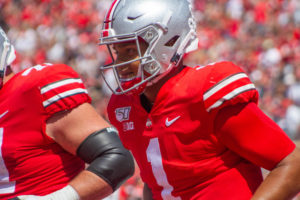 It has been an impressive first two weeks for Ohio State quarterback Justin Fields, but just how impressive have they been?

Fields’ opening two starts for the Buckeyes have amounted in some impressive numbers: 38 of 50, 458 yards, six touchdowns, zero interceptions and a 192.5 passer efficiency rating.

He also has the highest adjusted completion percentage in all of college football.

Here are the quarterbacks with the highest adjusted completion percentage so far this season! pic.twitter.com/hZ2Sl3YY8J

But Fields’ passing talents are only part of what makes him such an impressive player, with his mobility being the other. Thus far, Fields has ran 21 times for 103 yards and three scores. So where do those numbers stack up against the first two starts for the four most recent major quarterbacks at Ohio State?

It is worth noting that Jones’ starts should be taken in a different thought because they came in the Big Ten Championship and the College Football Playoff against Alabama, so those 500 yards did not come easy.

But the real standout stat is this: Fields is almost identically on par with Haskins from a season ago: both had exactly 561 yards of total offense and nine touchdowns, with Haskins throwing an interception and Fields remaining without a turnover.

Haskins’ numbers came in a more traditional sense, but Fields is really making his impact felt without losing a step to his predecessor, who ended up breaking multiple Big Ten records and finishing No. 3 in the Heisman voting.

Fields’ potential is enormous and the expectations are even higher than that, but through two games, he is more than living up to what was expected from him.