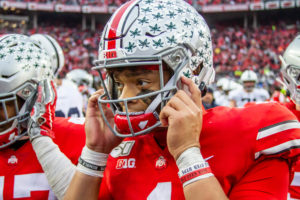 In his first season at Ohio State, and first season as a starting quarterback at the collegiate level, Justin Fields has been named the Graham-George Offensive Player of the Year, which is awarded to the best player on the offensive side of the ball in the Big Ten.

Named after former Northwestern quarterback Otto Graham and Ohio State running back Eddie George, Fields was recognized for the honor after leading the Buckeyes to a 12-0 record, No. 1 spot in the College Football Playoff and a place in the Big Ten Championship against Wisconsin.

During his first 12 college starts, Fields has amassed 2,654 passing yards and 37 touchdowns through the air with just one interception. On the ground, he has also added 470 rushing yards and 10 scores on 4.2 yards per carry (including sacks).

The 47 total touchdowns is already tied with J.T. Barrett for the most total touchdowns in a single season in program history, with Dwayne Haskins’ 54 last season being at the top. Fields also ranks No. 3 in the NCAA in touchdown passes, and he is the only quarterback in the FBS with more than 155 throws (277) and only one pick.

Fields is the fifth Ohio State winner in the past eight seasons, with Braxton Miller winning in both 2012 and 2013, Ezekiel Elliot winning in 2015, and Haskins winning a season ago.

Overall, Fields is the seventh Buckeye to win Big Ten Offensive Player of the Year since the award was split into offensive and defensive awards, joining Haskins, Elliott, Miller, Troy Smith in 2006, Orlando Pace in 1996 and George in 1995.

Fields and Chase Young, who won Big Ten Defensive Player of the Year, are only the second pair of Ohio State teammates to win the awards in the same season. The first came when Miller and defensive lineman John Simon both won the awards in 2012.