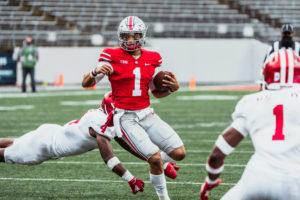 Ohio State junior quarterback Justin Fields was named Big Ten offensive player of the year by the Associated Press for the second year in a row, an accomplishment he also earned from the Big Ten when the conference released its offensive awards.

Fields heads into a College Football Playoff matchup against Clemson completing 72.6 percent of his passes for 1,521 yards and 15 touchdowns to five interceptions, with those numbers coming despite a lackluster showing in the Big Ten Championship (12 of 27, 114 yards, two interceptions).

Fields was a unanimous selection to the first team, and was joined by two of his offensive linemen – junior guard Wyatt Davis and senior tackle Thayer Munford – on said first team. Defensively, the Buckeyes had just one AP first-team member, cornerback Shaun Wade, who was named defensive back of the year by the Big Ten.

Ohio State racked in the second-team selections from AP, though, with eight players overall being mentioned. That included junior center Josh Myers, junior wide receiver Chris Olave, sophomore running back Master Teague and Garrett Wilson on the offensive side of the ball.