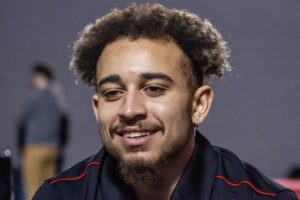 In Ryan Day’s first attempt at putting together a recruiting class as a head coach, Ohio State finished with the fifth-best class in the country in 2020 according to 247Sports.

There were more than a few highlights, including three five-star commits, but at the top of the class was Julian Fleming, a five-star wide receiver from Catawissa (Pa.) Southern Columbia who ranked as the top wideout in the class and the No. 3 prospect overall.

“I think he’s physical. He’s big. He’s strong. He’s mature,” Day said on Feb. 5, which was National Signing Day. “I think so far his work ethic has really shown that it matters to him. He really cares. And his attention to detail is strong already, as a young player, but we’ll see.

“We haven’t got to the field yet but playmaking ability, God gave him some great talents. And then how does he create the discipline and skill that he needs to play at this level. That will be between he and (wide receivers coach Brian Hartline). I think he’s got the right tool set and the right mentality.”

Fleming is coming to Ohio State as the top member of what ended up being a loaded wide receiver class for Day and Hartline. That 2020 wide receiver haul – which also includes Rockwall, Texas, five-star Jaxon Smith-Njigba, Sammamish (Wash.) Eastside Catholic four-star Gee Scott and Pattonville (Mo.) Maryland Heights four-star Mookie Cooper – features four receivers among the top 100 overall prospects and is one that Fleming believes can be historic.

“I’m sure everybody in the group has their own thoughts and expectations that they want to live up to, but as a group, I would say we do want to go out as one of the best wide receiver classes,” Fleming said in February. “There’s going to be a lot of work and a lot of commitment that’s going to have to be put in to get to that point because Ohio State has put out a ton of great wide receivers. It’s Zone Six, so we’re going to have to work our way up.”

The past two seasons, Ohio State has been able to rely on a deep pool of veteran wideouts to be the main targets of both quarterbacks Dwayne Haskins and Justin Fields. In Haskins’ lone season as starter, 167 of his completions for 2,433 yards and 31 touchdowns went to the fifth-year senior trio of Parris Campbell, Johnnie Dixon and Terry McLaurin, while in Fields’ first season starting, 119 completions for 1,570 yards and 19 scores went to three seniors in K.J. Hill, Austin Mack and Binjimen Victor.

But headed into 2020, the main returning receivers are a junior and a sophomore in Chris Olave and Garrett Wilson, leaving a lot of room for the incoming freshman talent to make an immediate impact.

Still, Fleming is not coming into his Ohio State career with any expectations, instead getting ready for the process and the development in order to earn his place on the depth chart.

“You have to earn your whole way up,” Fleming said. “Nothing’s given to you. I mean you come to college and you think you’re the cream of the crop, the best one. You come to one of the top colleges in the country, you’re going to get put in your place real quick.

‘So high school, yeah, sure I was at the top. I came here I’m at the bottom. And it’s just going to be gradually improving and working my way up to hopefully get back to the top.”

Even with Fleming’s mentality of having to work toward playing time, he is also aware that the road to making a first-year impact under Day and Hartline has been paved by Wilson. In 2019, his freshman season, Wilson caught 30 passes for 432 yards and five touchdowns, all numbers that were fourth best on the team.

Wilson also made a larger impact as the season progressed, including a 118-yard performance against Michigan, as well as a highlight-reel catch against Clemson in the College Football Playoff Semifinal. He was a five-star prospect who had a world of expectations behind him, and Fleming sees Wilson’s first season as a goal for which to strive in 2020.

“Garrett had a great year last year and he’s going to have another great year this year, I’m sure of it,” Fleming said. “Seeing him play and compete at such a high level definitely did give me a little boost. I liked it, I liked it a lot and just seeing how quick he got in as a freshman.

“Ohio State – they’re deep, they’re deep at wide receiver and they continue to get guys in the rotation, so I like that a lot.”

Wilson came into Ohio State with just one other receiver in his recruiting class: four-star Jameson Williams. But Fleming welcomes the idea of coming in with three other top-100 prospects at wideout, saying it shows how much this unit is striving to succeed, even with one of the most stacked wide receiver rooms that could be found anywhere in college football.

“The willingness to compete,” Fleming said of the 2020 receiver group. “We all felt like we were the top guys and competed like we were top guys, so at this point it’s just who’s going to come in and work their tail off to continue to improve and be another top guy at a college program.”

There are plenty of unknowns about the upcoming football season which is already without nonconference games for the Big Ten, and the ongoing pandemic has already cost Ohio State’s early enrollees, Fleming included, crucial time to develop and make an impact on the coaches.

But Fleming will continue to bring high expectations from the fan base into the 2020 campaign thanks to his five-star rating and spot atop an exceptionally strong Ohio State recruiting class.

If you ask Fleming, though, none of those rankings and expectations matter now that he is a part of the Buckeyes.

“In high school, you know expectations were high. And obviously my expectations for myself were higher than everybody else’s, so it was just continuing to be the best version of myself,” Fleming said. “Coming in here now, I’m not rated anything. I’m not any stars. I’m a freshman. I know how to stay looking to earn a position, so it’s a completely different thing from high school because you know those rankings go out the door very quick.

A longer version of this story was previously in the June print edition of Buckeye Sports Bulletin. For four free issues of the print edition, no card required, sign up at the link here: http://www.buckeyesports.com/subscribe-4issue-trial/