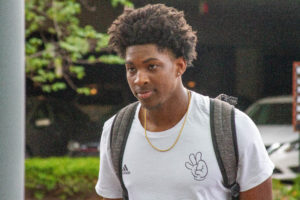 With Jordan Fuller, Brendon White at the “Bullet” and Isaiah Pryor all likely ahead of him in the pecking order, it has been Josh Proctor that has been named time and time again by other members of Ohio State’s defense as the best ball hawk in the fall.

“He just look ready to me,” junior defensive end and captain Chase Young said. “He’s making plays. He’s got the body. I feel like he’s getting the feel a little bit more, I feel like he’ll be ready,”

“He has about, like, eight interceptions,” junior corner Jeff Okudah said. “He’s really rangy. I think he’s really talented. I’m excited to see him translate that to the game field.”

Proctor found playing time in nine games last season for the Buckeyes, and came in as a four-star prospect, the No. 7 safety in his class.

Jacksonville Jaguars cornerback Jalen Ramsey, he was a five-star out of high school. Former Ohio State and current Indianapolis Colts safety Malik Hooker, he was a three star. But both found success in college and were each selected in the top 15 in the NFL Draft.

Shaun Wade, the most versatile defensive back in the secondary, sees both of those players in Proctor’s game.

“He’s 6-3 but with Jalen Ramsey arms looking like Jalen Ramsey, running, hitting everything. He’s going to be very, very (good),” Wade said. “He’s like Malik Hooker but bigger and taller.”

Co-defensive coordinator and secondary coach Jeff Hafley has plenty of options to work with, and he has said that he plans to mix and match defensive backs into multiple areas depending on what is needed, even saying in a slightly joking manner that he will play seven defensive backs at once if the time comes for it.

Only time will tell if a true sophomore will not only find meaningful time behind a solid group of safeties, but also if he will be able to make the same plays that he has been showing off during camp.

But for Proctor to be showing signs of greatness in his second year only makes his potential skyrocket for upcoming seasons with Fuller, and possibly White if he enters the draft, leaving after this season.

“There’s not a lot of Josh Proctors in this world,” he said.