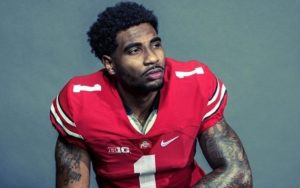 Braxton Miller excelled at quarterback for Ohio State before suffering a shoulder injury, which forced him to miss the 2014 season and transition to wide receiver.

Prior to the injury, the Hubert Heights (Ohio) Wayne product deflated defenses with his arm and his legs, proving to be a lethal dual-threat quarterback.

Miller won 2011 Big Ten Freshman of the Year, throwing for 1,159 yards and 13 touchdowns to four interceptions, with 715 rushing yards and seven ground scores across 12 games.

As a sophomore, the Springfield, Ohio, native threw for 2,039 yards and 15 touchdowns to six interceptions, adding 1,271 yards and 13 touchdowns on the ground in 12 games.

Steadily improving as a passer, Miller completed 54.1 percent of his passes as a freshman, 58.3 percent as a sophomore and 63.5 percent as a junior.

Not only did Miller secure back-to-back Griese-Brees Quarterback of the Year and Big Ten Offensive Player of the Year honors, but he also won Big Ten Most Valuable Player in 2012 and 2013 as well.

After suffering a season-ending shoulder injury right before what was to be his senior season, Miller watched J.T. Barrett and then Cardale Jones lead the Buckeyes to win the 2014 CFP National Championship at quarterback.

Miller took a medical redshirt and returned for a fifth season, transitioning to receiver. The dangerous playmaker carried the rock 43 times for 261 yards (6.1 average) and one touchdown, while hauling in 25 passes for 340 yards and three receiving touchdowns in 13 games in 2015.

Barrett, a former teammate of Miller, remembered how the dual-threat dynamo struck awe into players and coaches on a regular basis.

“You just wondered how he did it,” Barrett said of Miller. “And I understand people only saw what he did on game days, but we saw it in practice all the time. It was almost like you shrugged your shoulders and rolled your eyes because you had no idea how that happened.

“Whether it be running the ball or throwing the ball — he was up there — one of the best athletes that I’ve been on a team with. And it was just like everything looked so smooth. I think that was the craziest thing about it. He didn’t look like he strained to do anything.

“Things he did — it was just like, ‘Wow, I don’t know how he did that.’ But he made it work, and that’s part of why he was really good — you just can’t coach those things. And with him, there were a lot of things you just couldn’t coach.”