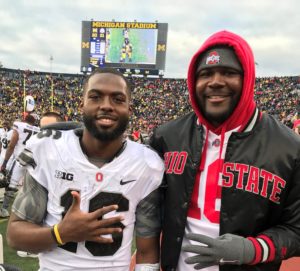 Former Ohio State quarterbacks J.T. Barrett and Cardale Jones experienced quite different careers at the helm of the Buckeye offense, but both enjoyed success, including the 2014 national championship.

Barrett ended up breaking about every record a quarterback could break for the Scarlet and Gray, but before he became known as a Buckeye great, he was a redshirt freshman who filled in for an injured Braxton Miller.

Barrett beat out Jones for the starting spot and led the Buckeyes to a 10-1 record heading into a pivotal showdown with archrival Michigan. Ohio State led the Wolverines 28-21 in the fourth quarter when Barrett went down with a season-ending broken ankle.

Jones filled in for his friend, Barrett, and the rest was history.

Not only did Jones lead the Buckeyes to their first national championship in 12 years, he did so in style. The gunslinger completed 12 of 17 passes for 257 yards and three touchdowns to best the Badgers, 59-0, to win the Big Ten and impress the CFP Committee to put Ohio State in the inaugural CFP.

Jones tossed for 243 yards with one touchdown and one interception, completing 18 of 35 passes and rushing for 43 yards in a 42-35 win against national powerhouse Alabama in the Sugar Bowl.

Rising to the occasion once again to win the national title, Jones completed 16 of 23 passes for 242 yards and one touchdown in a decisive 42-20 triumph over Oregon. He also threw an interception but gained 38 rushing yards with a touchdown on the ground as well.

Buckeye Sports Bulletin asked Barrett about his friend and former teammate, Jones. Even though he was so successful himself, Barrett reflected on how awe-inspiring Jones was at Ohio State, using his rocket-like arm to make the impossible, possible.

“His IQ for football is definitely at a high level,” Barrett told BSB of Jones. “Being that he is 6-6 and like 250, he was able to throw the ball and put the ball into places that I wouldn’t even dare to, or I would’ve just thrown it earlier.

“He would take chances in games. And he would wait and then just rocket it in there. I don’t know too many human beings on this earth that can do that.

“I would’ve thrown it earlier in order to not have to fire it so hard. Dude would wait some times and then he’d make throws that would be like, ‘Woo-wee — I wouldn’t have done that.’ I might’ve checked it down.

“But he was able to do great things for us at Ohio State. And he’s still being able to be in the NFL as well … but his arm is crazy.”