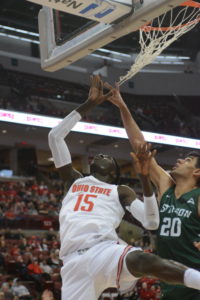 According to an Ohio State spokesman, sophomore Ibrahima Diallo is entering the transfer portal.

The 6-10, 220-pound center played in 13 games over two seasons at Ohio State. Last year he averaged 0.2 points and 0.8 rebounds a game in five appearances off the Buckeye bench. He also missed a stretch of almost two months due to a knee injury.

He was slightly more prolific in his relatively healthy freshman campaign, in which he averaged 1.3 points and 1.9 rebounds per game.

Diallo hails from Saly, Senegal, but played his high school ball at Prolific Prep – a basketball academy in Napa, CA. He was a three-star recruit when he committed to OSU in April 2019.

Prior to his departure, coach Chris Holtmann had told reporters that his team was at the NCAA scholarship limit for the upcoming season.