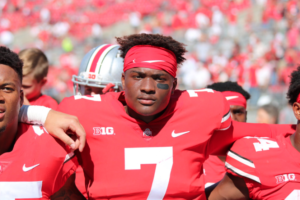 Ohio State sophomore quarterback Dwayne Haskins has only started six games, but he’s already left his mark on the Buckeyes’ record book. People around the Big Ten (and the nation) seem to have taken notice.

After throwing for 455 yards and six touchdowns against Indiana on Saturday, Haskins was named the Big Ten offensive player of the week for the third time in a row and the fourth time this season. The conference record for single-season weekly offensive honors is five, held by former Ohio State quarterback Troy Smith, who reached the mark in 2006, the same year he won the Heisman Trophy.

Haskins’ 455 yards against the Hoosiers were three short of the program record, which was set by Art Schlichter in 1981. His six touchdown passes tied the program mark, also held by J.T. Barrett and Kenny Guiton, and his 33 completions tied Barrett’s school record set against Penn State last year. Haskins also threw two interceptions in the game, bringing his season total to just four, and his 25 touchdown passes lead the nation.