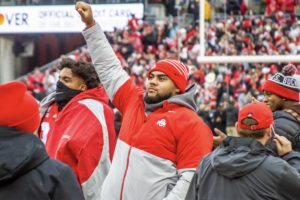 Despite being shot in the face less than two months ago, Ohio State defensive tackle was left off of the first status report, meaning he is considered active for the first game of the season against Nebraska.

Garrett was shot through both of his cheeks while supposedly attempting to break up a fight between a man and a woman on the night of Aug. 30. He then ran half a mile to his friend’s apartment, which is where police found him after finding a shell casing and a trail of blood that led to the apartment.

Back on Oct. 7, defensive line coach Larry Johnson was not sure if he would be getting his senior lineman back by the start of the season.

“We don’t know yet. It was a very sensitive area that he was injured,” Johnson said. “So we’ll just kind of wait and see what the doctors tell us when he’s ready to go. He’s in practice, there’s just things he cannot do. But he is in practice every day, he’s really engaged, he’s in great spirits. So we’ll just have to wait and see.”

Elsewhere on the defense, sixth-year senior linebacker Justin Hilliard has been listed as a game-time decision. Hilliard has missed the bulk of his collegiate career with injury problems, which allowed him to be approved to return to the Buckeyes for the 2020 season.

Among the players listed as inactive for Nebraska is running back Marcus Crowley, who suffered from a torn anterior cruciate ligament in his right knee last season, and a long list of freshmen, including cornerback Lejond Cavazos, defensive tackle Jacolbe Cowan, running back Miyan Williams and safety Kourt Williams, the latter of which is expected to miss the entirety of the season with an ACL injury.

Not listed on the report is running back Master Teague, who is active following an Achilles injury in spring practice, and defensive tackle Taron Vincent, who missed all of last season with a shoulder injury.