Greg Schiano: Rotation at Middle Linebacker Will Continue, Shaun Wade Working at Both Safety and Corner 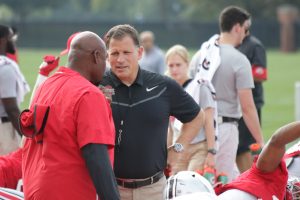 Greg Schiano followed Ryan Day at the podium on Monday as the Buckeyes put the Rutgers game to bed and turned the page quickly to TCU.

Schiano said that Ohio State is working to move Nick Bosa around this week so that the Buckeye defense is not as predictable.

“He is playing at a very high level. As an offensive coach, you have to know where he is all the time,” he said.