Four Things We Learned About The Buckeyes’ DL This Week 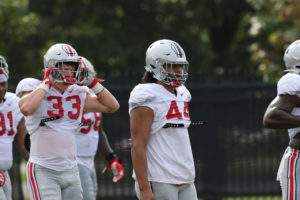 Four Ohio State coaches and two position groups met with members of the media this week at the Woody Hayes Athletic Center, where the Buckeyes also hosted an open practice session on Wednesday.

On Tuesday, defensive line coach Larry Johnson discussed his front four in great detail, while several key members of the unit were available for interviews as well.

We’re parsing everything we heard from Johnson’s unit to bring you four things we learned about the Ohio State defensive line as the Buckeyes’ preseason preparations head into the third week of the month.

Sawyer has packed on 30 pounds

Five-star freshman defensive end Jack Sawyer was “not quite ready” to handle the physical demands of the Ohio State program when he entered back in the winter, according to Johnson.

Sawyer weighed in around 225 pounds and had not played his senior season of high school football in Pickerington, Ohio, due to COVID-19, but Johnson said the strength and conditioning staff helped Sawyer pack on a considerable amount of size since then.

“He got in here, he was probably about 225, 230 when he walked in the door. He’s about 255 now, so he’s put on almost 30 pounds of just muscle mass since he’s been here,” Johnson said. “So it’s been a transition. He didn’t play football, so he wasn’t as strong when he came in. But over the summer, coach Mick and his staff did a great job getting him ready.”

Despite the weight gain, Johnson described Sawyer’s style of play as more finesse than power, but said his competitive edge sets him apart from other young players he’s seen in the system.

With Friday sidelined, Sawyer and J.T. Tuimoloau might just see a boost in opportunities this season as true freshmen.

Friday taking Tuimoloau under his wing

Senior defensive end Tyler Friday may be injured, but that doesn’t mean he is without responsibilities for the Buckeye defensive line during the preseason.

Not only has the New Jersey native been helping facilitate drills for Johnson and company during practice, but Friday has also been assigned the task of taking five-star freshman defensive end J.T. Tuimoloau under his wing while he acclimates to the Ohio State program.

“He’s J.T.’s big brother,” Johnson said. “We put him in charge of J.T. and made sure he gets him coached up as we go. And that’s been going really well.”

Tuimoloau, who committed to Ohio State on July 4, has been developing rather quickly though, as Johnson said he came to Columbus in great shape and has been studying the game nonstop during the fall.

As for Friday, Johnson said the team is still unsure what his injury status will be as the season moves forward. Head coach Ryan Day previously said Friday might miss most of the year.

Both junior defensive end Zach Harrison and redshirt senior defensive tackle Jerron Cage were among the seven players Johnson listed as his top linemen overall entering 2021, but both were relegated to the side field during Wednesday’s open practice.

It’s difficult to discern whether or not the respective injury issues each player is dealing with have more to do with load management or something more serious, but Harrison did appear to be moving somewhat gingerly during the session.

Day said after practice that several players are simply working through the bumps and bruises of a physical preseason, and until we hear otherwise, it is likely safer to assume that Harrison and Cage have short-term ailments to heal up from before the season opener.

Vincent working at both tackle spots

Former top-20 overall prospect Taron Vincent came on strong at the end of 2020 at the defensive tackle position, having finally put several nagging injury issues behind him, and since then, coaches have raved about his offseason development.

However, the redshirt junior has just one problem; the three-tech tackle position figures to be manned by returning All-American tackle Haskell Garrett this season.

Even if both players stay exclusively at three-tech, Vincent should see a significant uptick in snaps due to the longer season and nature in which Johnson rotates his linemen.

For the sake of versatility though, Vincent has spent time at the nose tackle spot as well.