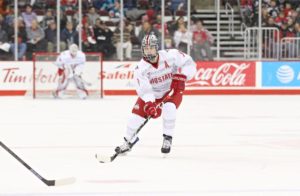 Laczynski, a senior forward, was named Second Team All-Big Ten while Ege and Myer, who were both senior defensemen, along with Nappier, a junior goalie, were Honorable Mention All-Big Ten honorees.

Myer also won the Big Ten Sportsmanship Award for Ohio State. The All-Big Ten teams were selected by the seven head coaches in the conference and a media panel.

Laczynski concludes his Buckeye career as a three-time All-Big Ten honoree, after winning first-team accolades in 2018 and honorable mention recognition in 2019 before the second-team nod in 2020. The alternate captain posted a team-best 34 points and 23 assists, ranking fourth with 11 goals, in 2019-20, marking his fourth consecutive season with 30 or more points, 20 or more assists and 10 or more goals.

At the time the season was cut short by COVID-19, Laczynski tied for third among Big Ten players in points and ranked second in assists, while leading the league with 14 power play assists and 17 power play points. The Shorewood, Illinois, native  finished his career tied for No. 22 on Ohio State’s all-time points list with 143 points, including 95 assists, in 138 games. He is the second Buckeye to earn All-Big Ten first/second/honorable mention recognition three times, joining Mason Jobst (2017-19).

Ege, a fifth-year senior, played in 35 games for the Buckeyes in 2019-20, helping the team hold opponents to 2.28 goals a game, which ranked No. 13 nationally in team defense. Also an alternate captain, Ege, recorded his Ohio State career-high four goals, including a hat trick at Mercyhurst, in addition to eight assists for 12 points.

Ege had 33 shot blocks and ended the year plus-10, tying for second on the squad. The Elk River, Minn., native played in 145 collegiate games, with 10 goals and 44 helpers for 54 career points. He played 111 games for the Buckeyes, posting 41 points, with six goals and 35 assists, along with 106 shot blocks and a plus-25 rating.

Myer played in all 36 games in 2019-20, also helping lead the nation’s No. 13 defense, which held opponents to 2.28 goals a game. Also an alternate captain for the Buckeyes, he notched a career-high five goals and 14 points, ranking second in scoring among the Buckeye blueliners and tying for No. 11 among Big Ten defensemen.

The Sylvania, Ohio, native finished first on the team and tied for sixth in the Big Ten with 68 shot blocks. Myer wrapped up his Scarlet and Gray career with 133 games played, totaling eight goals, 37 assists and 45 points, with 192 shot blocks and a plus-30 rating, which marks the fourth-best for an Ohio State defenseman since 2001. The Big Ten Sportsmanship Award winner played a clean game, recording only 14 penalties and 31 penalty minutes throughout his four-year career, with five penalties as a senior.

The St. Louis native started 32 of 36 games for Ohio State in 2019-20, earning Big Ten Star of the Week honors four times and the NCAA Goalie of the Month honor for December. Nappier will enter his senior season with a 33-14-7 overall record, along with a stellar career numbers, including a 1.92 goals-against average and a .934 save percentage.

The three seniors all had earned Academic All-Big Ten recognition during their careers. Laczynski and Myer earned their bachelor’s degrees in the spring of 2020, while Ege was enrolled in the master’s of coaching program after earning his undergraduate degree in 2019.

Ohio State ranked No. 10 at the end of the COVID-19-shortened season, boasting a 20-11-5 record with an 11-9-4-1 ledger in Big Ten play. The Buckeyes finished the season in a tie for second in the conference and had earned the No. 2 seed in the Big Ten Tournament. They swept Wisconsin in the first round of the conference tournament, with 9-1 and 2-1 OT victories, in what ended up to be the final games of the season once it abruptly ended.