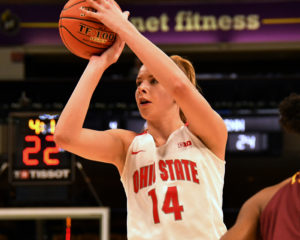 Ohio State junior forward Dorka Juhasz was selected by the coaches and the media as one of the 10 players on the Preseason All-Big Ten team.

Juhasz, who finished last year on the All-Big Ten team, ended the 2019-20 season as Ohio State’s leader in points (13.2 PPG) and rebounds (9.4 RPG) for the second straight season, improving her numbers in both of those categories from the year prior. She shot 47.6 percent from the field and 39.2 percent from three.

The third-year forward out of Pecs, Hungary was one of four unanimous selections on the coaches ballot, along with Rutgers guard Arella Guirantes, Michigan forward Naz Hillmon and Northwestern guard Lindsey Pulliam. Showing the parity at the top of the conference, Guirates and Hillmon split the Preseason All-Big Ten Player of the Year honors for the coaches, while Pulliam was selected by the media.

The coaches and media again agreed on which five teams would be the top five in the Big Ten for the 2020-21 season, but they did not share the same ranking.

Still, both polls had Indiana atop the conference following a 24-8 season in 2019-20. Both also had Ohio State coming in fifth place in the 14-team conference, a position that would be a slight step up for the Buckeyes after finishing with a 21-12 record, including an 11-7 record in the Big Ten, good for sixth place.

Aside from the Hoosiers and Buckeyes, Maryland, Michigan and Northwestern were also placed in the top five, with those three teams ranking No. 2, 3 and 4 by the coaches, but No. 3, 4 and 2 by the media, respectively.

Maryland and Northwestern shared the Big Ten regular season title with a 16-2 conference record before the Terrapins defeated Ohio State 82-65 in the Big Ten tournament finals. Michigan went 10-8 in the Big Ten last season, good for seventh place. They fell to the Buckeyes 66-60 in the tournament semifinals.