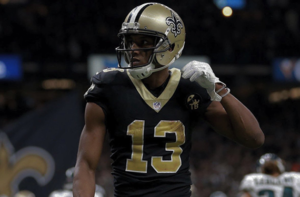 Former Ohio State wide receiver Michael Thomas is now the highest-paid wide receiver in the NFL after agreeing to a five-year, $100 million contract extension with the New Orleans Saints on Wednesday morning.

According to ESPN’s Adam Schefter and NFL Network’s Ian Rapoport, Thomas’ new contract includes $61 million in guaranteed money — the most ever for an offensive player that’s not a quarterback. He is now the 22nd-highest-paid player in the league.

A second-round pick out of Ohio State in 2016, Thomas has caught 321 passes — the most ever by a player in his first three seasons in the league — for 3,787 yards and 23 touchdowns. His 125 catches led the NFL last season, and he was recently named by his peers on NFL Network as the 13th-best player in the league.