Former Ohio State Wide Receiver K.J. Hill Selected By The Los Angeles Chargers With The No. 220 Pick In The 2020 NFL Draft 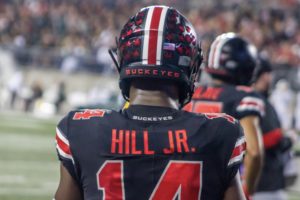 Former Ohio State wide receiver K.J. Hill was selected by the Los Angeles Chargers with the No. 220 pick in the seventh round of the 2020 NFL Draft, the ninth Buckeye receiver to be selected in the NFL Draft since 2015.

Hill was a three-year starter for the Buckeyes, taking over in the slot in 2017 as a sophomore after playing sparingly as a redshirt freshman in 2016.

He reeled in 201 catches in his career with Ohio State, making him the all-time receptions leader in school history, toppling David Boston’s 191. He came within a game of breaking Gary Williams’ consecutive games with a catch streak, finishing with 48, tied for the most in school history. His 2,332 career yards and 20 career touchdowns are both sixth in school history.

As a senior in 2019, Hill led Ohio State in receptions with 57, racking up 636 yards and 10 touchdowns on the year. He was named honorable mention All-Big Ten for the second straight season.

He garnered late interest from Ohio State after months as an Arkansas commitment. He flipped to Ohio State on National Signing Day after taking an official visit just over a week prior.