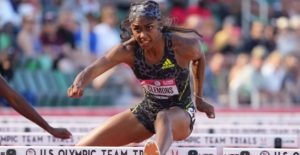 Former Ohio State sprinter Christina Clemons qualified for her first Olympics Sunday after finishing third in the 100-meter hurdles at the U.S. Olympic track and field trials. She will represent Team USA in the Tokyo Games next month.

After the race, Clemons held back tears, describing what qualifying for the Olympics means to her and what she has overcome to earn a spot on the American roster.

Clemons overcame a torn Achilles in 2013 and lingering hamstring issues to become one of America’s best track athletes. After recovering from her injuries, Clemons claimed a silver medal in the 60-meter hurdles at the 2018 World Indoor Championships and a gold medal in the mixed shuttle hurdle at the 2019 IAAF World Relays.

Before her professional career, Clemons was one of the most decorated athletes in the history of Ohio State athletics.

Clemons’ collegiate accolades led to her induction into the Ohio State Athletics Hall of Fame in 2017. She is the latest of 12 women’s track and field athletes to earn the school’s highest honor for athletic achievement.

Clemons made headlines for her qualification but made headlines in other ways Sunday night. She placed third in the event while wearing Cool Ranch Doritos earrings, garnering widespread attention on social media and landing her on Twitter’s trending page.

On Monday, Clemons tweeted four photos from the race that show the recognizable Doritos bags hanging from both of her ears. She asked her followers to help the post reach the chip company in hopes that they would sponsor her, claiming that Frito-Lay could use Olympic-level representation in their advertisements.

Later that day, Doritos quote tweeted Clemons celebrating her qualification for the Tokyo Games. However, whether the company will meet Clemons’s request and offer her a sponsorship is still to be determined.

A sponsorship may be uncertain, but Clemons can be sure of one thing: she is an Olympian — one of the world’s greatest athletes, who will compete on the world’s biggest stage.

The Tokyo Games will take place from July 23 – August 8 and can be seen on NBC affiliated networks.