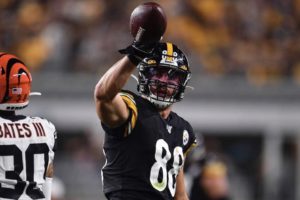 Source: The #Broncos have signed former #Steelers and #Seahawks TE Nick Vannett on a 2-year deal.

The 27-year-old Vannett played for the Buckeyes from 2011-15, helping the team to the College Football Playoff national championship during his redshirt junior season. He was selected by the Seattle Seahawks in the third round of the 2016 NFL Draft, and has caught 61 passes for 591 yards and four touchdowns in four seasons with the Seahawks and Pittsburgh Steelers.

Vannett will be reunited in Denver with former Ohio State tight end Jeff Heuerman, who also played an integral role in the Buckeyes’ aforementioned title run, as well as defensive tackle Dre’Mont Jones and defensive back Tyvis Powell.