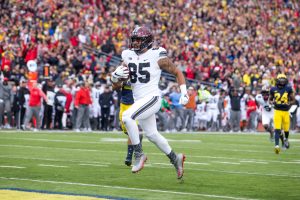 Former Ohio State tight end Marcus Baugh signed with Washington, joining Dwayne Haskins, Terry McLaurin, who will enter their second season in the NFL, and potentially Chase Young (Washington holds No. 2 pick in 2020 NFL Draft. Haskins took to Twitter to show his support of the move.

Baugh’s senior season was the highlight of his time in scarlet and gray, when he posted 28 catches for 304 yards and five touchdowns. The defining moment of Baugh’s Buckeye tenure came in a comeback win against Penn State, in which he snagged the game-winning touchdown from J.T. Barrett.