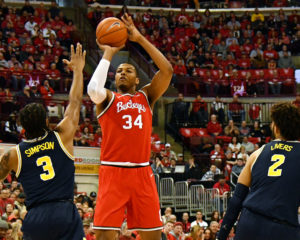 The former Buckeye big man left with one season of eligibility left to enter the 2020 NBA draft, and he was one of the top 105 players who received enough votes from NBA teams to be selected as a potential combine participant, according to USA TODAY Sports’ list. However, Jonathan Givony of ESPN estimated that only approximately 60 of those draft prospects officially received combine invitations.

The 2020 NBA Draft Combine was initially scheduled to be held May 21-24 in Chicago, but due to the coronavirus pandemic, there is no certainty that it is going to happen.

ESPN ranked Wesson as the No. 58 overall prospect in the 2020 draft class, so the combine could have a massive impact on his NBA future.