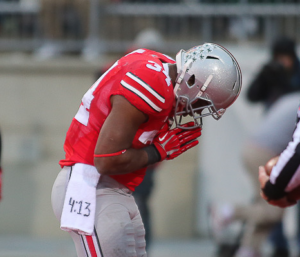 Former Ohio State standout Carlos Hyde spoke up in support of his former teammate Colin Kaepernick, in relation to Kaepernick’s peaceful protest against police brutality and racial injustice in 2016.

“I think the NFL can start by signing Kaep back,” Hyde told reporters on a video conference call. “I think if they sign Kap back, that’ll show that they’re really trying to move in a different direction. Because Kaep was making a statement four years ago about what’s going on in today’s world and the NFL didn’t bother to listen to him then, so I think they should start by doing that. After that, I’m not really sure what the NFL can do.”

Hyde, a running back, lined up in the 49ers backfield with Kaepernick, a quarterback, from 2014-16. The tailback joined the Seahawks on a one-year contract, but he said his former backfield mate belongs back in the NFL.

The talented Buckeye tailback said he supported Kaepernick’s kneeling during the national anthem four years ago as a peaceful protest against police brutality and racial injustice, but he did not entirely understand its magnitude because his priorities were geared toward football.

Despite being a proven talent in the league and holding multiple NFL records, Kaepernick has remained unsigned since March 2017.

NFL Commissioner Roger Goodell issued a recorded statement saying “we were wrong for not listening to NFL players earlier” in response to a video featuring several notable NFL players speaking out against police brutality and racial injustice, which features another former Buckeye running back, Ezekiel Elliott as well as former Ohio State standouts Michael Thomas and Chase Young. The commissioner failed to mention Kaepernick in his video.

“How many times do we need to ask you to listen to your players?” Tyrann Mathieu asked.

“What will it take?” DeAndre Hopkins asked.

“For one of us to be murdered by police brutality?” Jarvis Landry asked.

Then, the players’ voices came together in unison, giving suggestions on what the NFL can say.