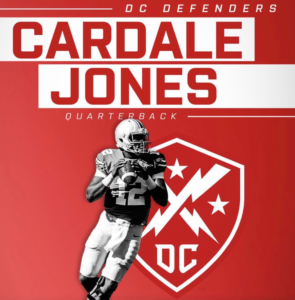 The former third string quarterback that led Ohio State to a national title in the first ever College Football Playoff has found himself a new home.

Cardale Jones has been assigned to the D.C. Defenders in the XFL draft, a league that will be reborn in 2020.

Jones is heading to the XFL following a stint in the NFL that started with being selected in the fourth round by the Buffalo Bills.

He then spent two seasons with the Los Angeles Chargers and was most recently with the Seattle Seahawks before joining the Defenders.

A high school prospect out of Glenville, Ohio, Jones was thrown into the spotlight following season-ending injuries to Ohio State quarterbacks Braxton Miller and J.T. Barrett that made him the starter for the rest of the 2014 season.

Jones’ first three starts came in the Big Ten Championship against Wisconsin, with ended in a 59-0 rout, and then two more wins in the College Football Playoff against Alabama and Oregon.

Through those three games, Jones threw for 742 yards, ran for 90 yards, and amassed six total touchdowns with only two interceptions en route to a championship.

During his entire Ohio State career, Jones finished with 2,322 yards through the air, 617 yards on the ground, and 19 total touchdowns.