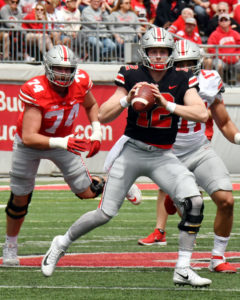 “I visited this past weekend and I had an awesome time,” Baldwin told 247Sports.

Though a starter had not yet been named, Baldwin elected to enter the transfer portal, with reports of him wanting to be closer to home.

“Just four or five years ago (TCU) was in the talk for the College Football Playoff,” Baldwin said. “They struggled last year, but they had a lot of injured guys. They can be a very winning program. The coaches were great.

“I knew Coach (Sonny) Cumbie a bit before I chose Ohio State. I like Coach (Garry Patterson) a lot. My teammates are good dudes with the same mindset as me: To play for each other and win games.”

Baldwin will arrive at TCU with three years of eligibility remaining. He plans to submit a waiver for immediate eligibility, and he should be enrolled by early June.

Baldwin’s decision to leave Ohio State was not predicated on one cause, such as location, but he is excited that Fort Worth is only about a three-hour drive from home in Austin.

The former four-star signal caller already has some rapport with Cumbie, TCU’s offensive coordinator, from his time as a recruit. Baldwin said he’s eager to play in what is considered quarterback-friendly spread offense.

“It’s exciting,” Baldwin said. “From what he told me it’s very passer-oriented. We’re going to throw the ball and get the ball in the playmakers’ hands. That’s what I like to do.”