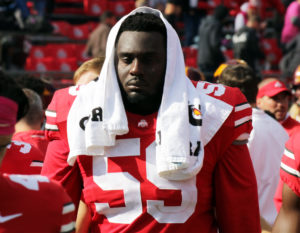 A former offensive tackle and fifth-year player for Ohio State in Isaiah Prince was claimed off waivers by the Cincinnati Bengals.

The Bengals claimed OT Isaiah Prince on waivers from the Miami Dolphins, and placed S Brandon Wilson on the Reserve/Injured list.

The former Buckeye tackle will be joining a couple ex-teammates on the offensive line. Cincinnati is also home to center Billy Price and guard Michael Jordan, who were selected by the Bengals in the first round and fourth round in the 2018 and 2019 NFL Drafts, respectively.

The trio of Prince, Price and Jordan all started together on the 2017 Ohio State team that finished the season 12-2 with a Cotton Bowl win over USC after just missing out on the College Football Playoff.

That season, Price was a consensus All-American and won the Rimington Trophy, awarded to the nation’s best center, while Jordan was named a Freshman All-American. Prince was named a Third Team All-Big Ten member.