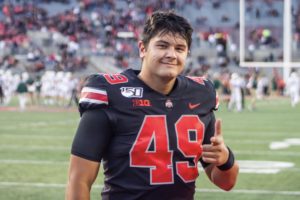 After not making it with the Las Vegas Raiders, the team that initially signed him as an undrafted free agent, former Ohio State long snapper Liam McCullough is getting another opportunity, signing with the Pittsburgh Steelers.

We have signed LB Jayrone Elliott and LS Liam McCullough.

The Steelers were looking to sign another at the position after Kameron Canaday, Pittsburgh’s long snapper since 2017, suffered a knee injury in training camp. He returned to practice Monday, however, with a precautionary knee brace.

The addition of McCullough gives Pittsburgh three former Ohio State players, with defensive lineman Cameron Heyward and linebacker Ryan Shazier, who is on the reserve/retired list and is still a part of the organization, being the others.