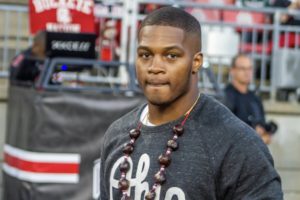 Former Ohio State linebacker Raekwon McMillan is on the move prior to the start of the 2020 NFL season, as he was traded by the Miami Dolphins to the Las Vegas Raiders on Aug. 29. The trade has been confirmed by Dolphins head coach Brian Flores. McMillan was sent to Las Vegas along with a 2021 fifth-round pick in exchange for a 2021 fourth-round pick.

McMillan was selected in the second round of the 2017 NFL Draft by the Dolphins but had his rookie season cut short before it ever started, tearing his ACL in a preseason game, which sidelined him for the entirety of the 2017 season. He returned and played in all 16 games for the Dolphins in 2018, recording 105 total tackles including five for a loss, but he saw his playing time dwindle a bit in 2019 in the first season under Flores, putting up 72 total tackles in 13 games while battling injury problems. Without an obvious fit in Flores’ system, McMillan found himself without a starting spot entering the 2020 season, leading to the move.

“He’s somebody who I have a lot of respect for,” Flores said of McMillan. “He’s a talented player. … He’s someone who I think will have a long career but there’s a lot of depth in that room.”

With the Raiders, McMillan will battle for playing time as a run stopping expert as Las Vegas looks to patch up a defense that struggled against the run in 2019. The loss of linebacker Marquel Lee following a failed physical this offseason could provide a niche for McMillan to fill on the defense as he looks to impress prior to becoming a free agent this offseason, barring an extension with the Raiders.

As a Buckeye, McMillan, a former five-star, found the field early on the 2014 national title team as a true freshman and slid into a starting role at middle linebacker in 2015 and 2016. He notched 275 total tackles, 18 for a loss and six sacks during his time in Columbus. He was a Butkus award semifinalist, second-team All-American and first-team All-Big Ten selection as a junior in 2016.