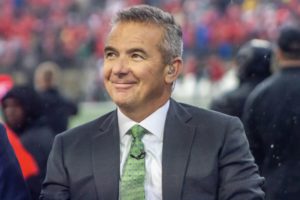 On ABC’s Good Day Columbus, former Ohio State head coach and current assistant athletic director Urban Meyer talked about the possibility of the Buckeyes playing football in the fall, and if he believes that outcome is still possible.

Meyer said that it’s “such a hard question” and that “it changes every day” on if he thinks that Ohio State will play in 2020, but that Ohio State’s leaders of both the university and the football program are putting everything on the table to try and make it happen.

“I can tell you our football coach, coach (Ryan) Day and (athletic director) Gene Smith are swinging, and our president, Kristina Johnson, is doing a heck of a job,” Meyer said. “It was devastating for all involved, I saw our parents, the players, Justin Fields, our coaching staff, they felt like they deserved an opportunity to play.”

Meyer also emphasized that he believes that the Ohio State players are safest when they are at the Woody Hayes Athletic Center thanks to the medical facilities and strict COVID-19 guidelines that are in place for everyone within the facility.

“I made the comment when we postponed or delayed and stopped everything that there is not a safer place that I am aware of in the country than what was going on at the Woody Hayes facility,” Meyer said. “They were getting tested twice a week our players, we have the best medical staff and training staff, our strength coach, everybody’s doing the right thing and then bang, it was gone.”

In the interview, Meyer said that Ohio State is still “preparing as if they’re going to play at some point,” and that he still remains hopeful for football in 2020. Following a weekend in which Ohio State was initially supposed to open its season against Bowling Green, Meyer was crushed to not see the Buckeyes in Ohio Stadium.

“It is heartbreaking to not see the scarlet and gray out there,” Meyer said. “Maybe we will before the season is over.”