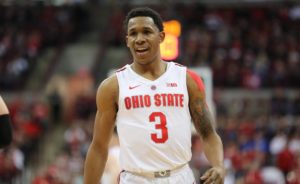 Although former Ohio State point guards C.J. Jackson and Keyshawn Woods were not selected in June’s NBA draft, their professional basketball careers will continue after they signed contracts this month to play in Europe.

Congratulations to Buckeyes @C_Jack13 and @KeyshawnWoods1 on officially signing their Pro contracts!

Jackson will play for Köping Basket — also known as the Köping Stars — of the Basketligan of Switzerland, while Woods will play for Feyenoord of the Dutch Basketball League.

Jackson played in 34 games (31 starts) during his senior season with the Buckeyes, averaging 12 points and 3.5 assists per game. Woods, meanwhile, appeared in 35 games (15 starts) and averaged 8.1 points and 3.1 assists per contest.