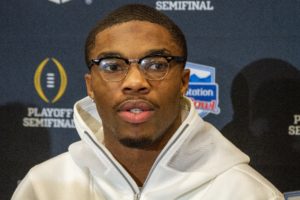 Following a season in which he was named a unanimous All-American, former Ohio State wide receiver Jeff Okudah is widely regarded as the best cornerback and probable top-five pick in the 2020 NFL Draft. But during his media availability at the NFL Combine in Indianapolis on Friday morning, a reporter asked Okudah a question about his “sloppy” play in college.

"Cut the tape on that again."

Okudah, seemingly surprised by the question, asked the reporter to elaborate.

“Penalties and stuff like that,” the unnamed media member said.

Okudah — who finished the year with 34 tackles, nine pass break ups, three interceptions and a forced fumble — suggested the reporter rewatch his film.

“I had zero pass interferences, zero holdings, so cut the tape again,” Okudah said. “I think you might see something else.”

Most mock drafts have Okudah being selected by the Detroit Lions with the No. 3 overall pick in April behind only former LSU quarterback Joe Burrow and former Ohio State defensive end Chase Young.