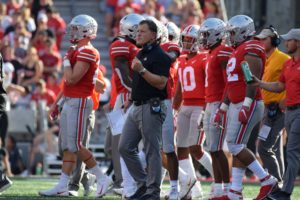 An old Ohio State defensive coordinator has found himself a new position at another Big Ten school.

Greg Schiano, who was with the Buckeyes from 2016 to 2018, has become the head coach at Rutgers, according to multiple reports.

The deal, which has been reported by The Athletic’s Bruce Feldman as an 8-year, $32-million deal with $25.2 million guaranteed, comes after another disappointing year for the Scarlet Knights, which saw the team drop to 2-10, and had them once again go winless in the Big Ten.

Schiano is entering his second stint as head coach of the program, the first of which came from 2001-2011, when he led Rutgers to five straight winning seasons, and bowl games in six out of his last seven years.

In those 11 seasons, Schiano had a 68-67 record, and a 28-48 record in the conference, which at the time was the Big East Conference before the Scarlet Knights made the move to the Big Ten.

The year 2006 was Schiano’s highlight. That season, Rutgers went 11-2, finished No. 12 in the polls and ended the season with a 37-10 win in the Texas Bowl over Kansas State.

While at Ohio State, Schiano controlled the defense for a team that lost only five games, but was also responsible for the worst statistical defensive output in the program’s history in 2018, which was enough for newly named head coach Ryan Day to say goodbye to Schiano, as well as the majority of the defensive staff.