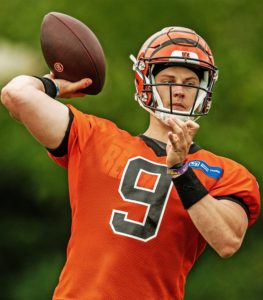 Former Ohio State quarterback Joe Burrow as having a promising start to his rookie season for the Cincinnati Bengals, but then the No. 1 pick took a hard hit to his knee on Nov. 22 in a game against the Washington Football Team, and it cost Burrow his season.

The No. 1 overall pick in the 2020 NFL Draft tore both his ACL and MCL in that game, taking him out for the rest of the season after 10 games.

But on Christmas, Burrow shared a video on Twitter showing him on his way to recovery from this brutal knee injury.

Burrow underwent the surgery to repair his leg on Dec. 3, to which the Bengals announced he was expected to make a full recovery.

The former Ohio State quarterback threw for 2,688 yards, 13 touchdowns and five interceptions during his rookie campaign after putting up historic numbers in his second season at LSU, in which he won the Heisman Trophy and national championship.

Burrow transferred to the Tigers from the Buckeyes following the 2017 season.