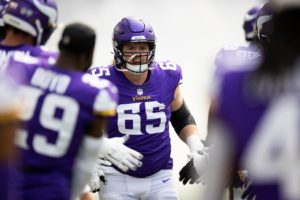 Just two days after he was released by the Minnesota Vikings, former Ohio State center/guard Pat Elflein was claimed off waivers by the New York Jets, according to NFL.com’s Ian Rapoport.

Elflein had been with the Vikings for the past three seasons, getting selected in the third round, No. 70 overall by the team in the 2017 NFL Draft.

He showed versatility on the offensive line for Minnesota, starting as the team’s center for his rookie season, earning PFWA All-Rookie Team honors in the process. He stayed at center in 2018, but moved to left guard in 2019 and then to right guard this season.

Versatility is nothing new for Elflein, who made the swap from guard to center during his time with the Buckeyes, making First Team All-Big Ten at both positions. He was specifically dominant at center, becoming a unanimous All-American and winner of the Rimington Trophy, which goes to the best center in college football.

Elflein first got his shot as a starter after offensive lineman Marcus Hall was ejected from the game against Michigan following an altercation that led to Hall displaying a pair of middle fingers to the Wolverine crowd as he left the field.

From there, Elflein finished the game and started against Michigan State in the Big Ten Championship in the following week.

Elflein, who is 26, is joining a New York Jets team that likely has its eyes set on the future after an 0-9 record to start the 2020 season.