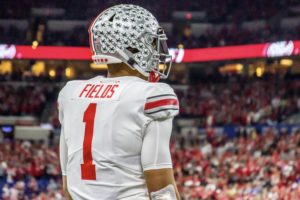 While Clemson got the better of Ohio State in last year’s College Football Playoff semifinal, the two programs will enter the 2020 season as the favorites to reach this year’s national championship game.

A potential rematch has wide-ranging implications, of course, particularly as the Buckeyes look to end a winless streak against the Tigers (0-4). But it could also serve as a battleground between quarterbacks Trevor Lawrence and Justin Fields, as they each look to stake their claim to be the No. 1 overall pick in next year’s NFL Draft.

“I put Trevor Lawrence at No. 1 for one reason: he played one more year, that was it.”@CoachUrbanMeyer gives his Preseason Top 5 QBs and explains why he puts the Clemson QB ahead of Justin Fields. pic.twitter.com/Q0QnAvPExY

Asked to rank his top five quarterbacks heading into the season, former Ohio State head coach Urban Meyer gave a slight edge to Lawrence, who led Clemson to a national title as a freshman and then a return appearance last fall, where the Tigers lost to LSU.

“I had Fields and Trevor right next to each other,” Meyer said during a special edition of FOX’s Big Noon Kickoff on Wednesday night. “I picked Trevor Lawrence for one reason: he played one more year. That was it.”

Fields was a Heisman Trophy finalist in his first season as a starter at Ohio State after transferring from Georgia, as he threw for 3,273 yards and 41 touchdowns compared to just three interceptions. He also rushed 484 wars and 10 more scores while leading the Buckeyes to their third straight Big Ten title and a berth in the College Football Playoff.

Both quarterbacks played well in Clemson’s 29-23 win over Ohio State at the Fiesta Bowl, as Lawrence finished the game 18 of 33 passing for 259 yards and two touchdowns, while Fields completed 30 of 46 passes for 320 yards and one touchdown. HIs two interceptions — including one in the end zone when wide receiver Chris Olave broke off his route with less than one minute remaining — proved costly, however.

Nevertheless, Meyer still had plenty of praise for Fields. His relationship with his successor, Ryan Day, as well as quarterbacks coach and son-in-law Corey Dennis, gives him a unique perspective on the Buckeyes’ second-year quarterback.

“The one thing I will say about Justin Fields, because I am very close to the situation, is that any concerns about him (not) being a throwing quarterback are gone now,” Meyer said. “He’s developed and he’s outstanding. I hear the guys talk, and comparisons to (Washington Redskins quarterback and former first-round pick) Dwayne Haskins are everywhere now as far as throwing the football, which — that’s an elite thrower.”

Meyer ranked Texas quarterback Sam Ehlinger at No. 3, USC signal caller Kedon Slovis at No. 4 and Florida quarterback Kyle Trask at No. 5.