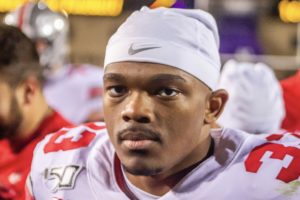 It’s difficult to say that Ohio State has a problem in the running game entering the offseason leading up to the 2020 season, because on its face, that sounds ridiculous.

The Buckeyes will return one of the fastest quarterbacks in America, and three offensive linemen on what was possibly one of the best run-blocking groups in school history.

With Justin Fields, Thayer Munford, Josh Myers and Wyatt Davis all still in Columbus, any problem in the running game — or on the offense at large — is going to be minimized from the start with pure talent.

That said, Ohio State is losing an All-American, record-setting halfback with J.K. Dobbins leaving for the NFL, and will likely be putting in his place a wildly different running back in Master Teague, barring any position battle upset bids from Marcus Crowley or Steele Chambers.

Teague is talented, as he showed off frequently in 2019, racking up 789 yards and four scores on 135 attempts (5.8 yards per attempt). He’s also 220 pounds, and as much of a one-cut back as college football has to offer. He’s tremendous going in a straight line and questionable in any other direction, through no real fault of his own. He’s simply built in a different way that what Ohio State has grown accustomed to in the Dobbins era.

In Ohio State’s old offense, that wouldn’t matter a whole lot. The Buckeyes used a power running system for years under former head coach Jim Tressel, and didn’t fully switch to the patience-based zone running scheme it deployed with Dobbins until last season. That scheme worked so well with the personnel, however, that it may be difficult to go away from.

With Teague, it may not need to, but it will need to make some changes. Unlike Dobbins, Teague is not going to have the patience and vision to find gaps from behind the line of scrimmage. He’s much more of a momentum runner, which means that he packs a bigger punch, but also means that he’s not going to be flashing incredible footwork any time soon.

To take advantage of that, Ohio State may need to look to get Teague downhill quicker than it got Dobbins downhill, or, for an answer that would keep the scheme fundamentally the same, it could slow down the play for Teague, giving him more time to read the defense.

For answers on how to do the latter in a concrete way, rather than just getting Teague plenty of reps and hoping that the game slows down for him, to use a football cliche, Ohio State could look to a bit of a strange place for some offensive innovation: Wake Forest.

After years of development of the spread option system in places like Florida and Ohio State under Urban Meyer and Oregon under Chip Kelly, not to mention the variations of the system (like Willie Fritz’s at Georgia Southern and Tulane, or Nevada’s pistol option), Wake Forest offensive coordinator Warren Ruggiero has seemingly cracked the code for the next evolution.

It comes at a time where changes to the way that teams run the option was desperately needed. Following the proliferation of Meyer’s inverted veer, which sees the quarterback and running back switch gaps on the read option, the development of the scheme has stagnated. Run-pass options added spice, but they’ve become essentially indistinguishable from traditional play action, the lines blurring because of lenient downfield blocker rules.

Ruggiero’s genius is essentially looking at the way the option is run, and recognizing that the danger is not in the speed of the decision, as originally thought, but in the decision itself. Beating a defense to the edge with a speedy quarterback or an even speedier H-back was always the conventional way to use the option to exploit slower, bigger defenses. Now, with defenses downsizing and placing five or six backs on the field at a time, the key is in forcing defenders to play gap-sound football.

“Their offense is different. They run the ball, they’re going to run the football, but the way they run the football is a little unorthodox compared to how everybody else is,” Taggart said. “It’s pretty unique in what they’re doing. They’re running the zone read but it’s really slow. The tailback and the mesh with the tailback and quarterback is really slow in how they do it.”

So, if Ohio State was to look to pick up pieces of Wake Forest’s innovation, what would that look like? Obviously, Ryan Day doesn’t need to completely change his offense to accommodate this in the way that Wake Forest has, because Ohio State’s roster is one of the nation’s most talented. Wake Forest is doing this out of necessity, to make up for a lack of size and talent advantage. Ohio State would be adding it as a feature to make an already dangerous offense even more lethal.

Take this design, for example. This functions in the same way that a traditional halfback dive does, with the ball carrier looking to run in the A gap with a strong block from the guard in front of him. However, on a usual dive, the running back is looking to get downhill as quick as he can, hoping to catch the linebackers flat-footed to beat them with pure speed.

On Wake Forest’s variation, the linebackers are given more than enough time to think, wherein lies the beauty of the design. The defenders are forced to announce their intentions, allowing the play-side guard to get downfield and lock onto a second-level defenders before the halfback even has the ball.

With Wake Forest, this design works because of the misdirection inherent in the bizarre hand-off timing. With Ohio State, the off-beat hand-off would add misdirection onto an already dominant interior line, while forcing Teague to get his eyes down field and keep his shoulders square to the line, establishing positive habits for non-delayed hand-offs.

The slow mesh isn’t exclusive to the running game, either. While it could help instill better habits in Teague, it would also add the RPO into Ohio State’s offense in a way that the Buckeyes have really never considered before. Day’s offense has RPO flavoring, but the approach Wake Forest takes to it could allow Ohio State’s speedy receivers to run rampant down the field. On this play, Wake Forest is threatening an inside zone, pulling both linebackers in as they read the offensive line.

With the linebackers in, quarterback Jamie Newman knows to pull the hand-off, entering the passing phase of the play. Because the linebackers are pulled in, the slant across the middle is wide open, though that’s not new to Wake Forest’s variation – that’s just how RPOs work.

Instead, the new wrinkle is the time that the primary target alone on the weak side has. At a traditional speed, this comeback route would not yet be developed when Newman pulls the ball. Here, because the hand-off is slowed down, Newman’s first read is coming open right as he pulls, making the read much easier.

This is the crown jewel of the offense, and the play that could most easily translate to Ohio State and Teague. Because of the delay in the backfield, Wake Forest is able to run to the outside with little to no resistance from the second level, because those linebackers are sucked into the middle without anything being sacrificed to pull them in. Generally, to get this kind of free room outside, there would have to be motion, a quarterback running threat, or a misdirection that captures the linebacker attention.

Here, the misdirection is again baked into the hand-off. While the line prepares for an outside run, with the tight end pulling to help seal the edge, the hand-off is mimicking a dive into the A gap. The linebackers read that, because outside runs are supposed to be fast. This one isn’t, so the defense rules out the possibility that it could be going to the outside. The linebackers bite in, the running back is forced to read it, and knows that his first cut after the hand-off is to the outside, where the defense has completely left its assignments.

While Wake Forest has built its offense around this concept and is essentially alone in doing that, the slow mesh isn’t actually entirely new. In fact, one of its original proprietors is quite the familiar face to Ohio State.

While it wasn’t quite as developed or as slow as it is now, Meyer’s offense at Ohio State under both Braxton Miller and J.T. Barrett had a modified version of this exact concept out of the mid-line read look that Meyer adored late in his career. The exploitation of the defense through forcing a decision was the same then as it was now.

For Ohio State to adopt the slow mesh into its playbook wouldn’t be a revolutionary change, it would be a reintroduction of a concept that Meyer rode to one of the most prolific running attacks in school history in 2013.

What could be revolutionary, however, would be the implementation of a varying in the speed of hand-offs on a play-to-play basis, something that Wake Forest has yet to truly do. Varying speeds is something that Gus Malzahn has experimented with at Auburn for years, but he does it with the speed of his huddles, using the change of pace to keep defenses off balance to great success. Varying the length of hand-offs on similar looking run designs could have a similar impact if utilized correctly, though the implementation would have to be fairly simple.

That final point is crucial for the entire idea, because Ohio State is not in a position to radically transform its running game for the sake of Teague, who may only be at Ohio State for one more season. The offense line knows zone blocking, and that’s what offensive coordinator Kevin Wilson is comfortable coaching. Small changes, however, like the occasional slowed mesh point, could be the key to retrofitting the offense around Teague, rather than forcing him into a system designed for a smaller, quick back.