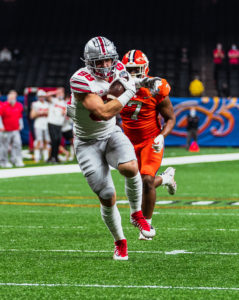 Ohio State looked, on Friday night against Clemson, almost completely unlike the team that it had been all season long, at least on offense. The defense was still much of the same.

However, in moving the football up and down the field on a good but not great Clemson defense, Ohio State showcased the kind of efficient, explosive, diverse attack that Buckeye fans dreamed to see in 2020 with the return of players like Justin Fields, Chris Olave, Thayer Munford, Josh Myers and Wyatt Davis.

It felt often throughout the 2020 campaign that the Buckeyes were so close to unlocking that next level of offensive dominance, but just couldn’t truly get the sports car into its final gear, getting stuck instead on a passing game limited to targeting two receivers or a rushing attack that was downright bad until December.

Then, against Clemson, everything seemed to just snap into place. Olave and Garrett Wilson were suddenly far from the only receivers playing a role in the offense. Fields was reading the defense comfortably behind an offensive line that absolutely manhandled a pretty solid Clemson front, blitz packages and all. Ohio State looked completely unstoppable, and if it stays in this form, it might just be unstoppable.

How’d the Buckeyes do it?

The operational phrase of the game is formation flexibility. Ohio State’s passing attack found success all game long against the Tigers by seeking out numbers advantages against the secondary with pre-snap motion, overloaded formations to the boundary and bunch looks. Clemson’s passing defense is designed around being plus-one in the secondary, meaning that if facing trips to one side, Clemson would want four defenders on that side to counter. When given time to adapt to the offense’s formation, Clemson will look to reach that plus-one quota.

So, Ohio State didn’t provide Clemson with that time to adapt. It extended huddles to prevent any sort of sign stealing, and used late-breaking motion to shift the strength of the formation before the defense had the time to counter and match those numbers.

That creates mismatches and one-on-one situations that Clemson would much rather avoid, but it also left the back side of the Tiger defense completely bare when it tried to hard to adjust to Ohio State’s pre-snap motion.

That produces a play like this. Clemson has the personnel to match Ohio State’s trips look to open the play, with three-high safeties (two of which would be dropping in to help against trips) and two defensive backs over the trips. That’s fine. There’s still help to the back side against Olave in the form of a cornerback and the third safety, and there’s a linebacker in the middle of the field to key on the run. Clemson isn’t in great shape, but this is doable.

Then, Ohio State sends Garrett Wilson in motion and ruins everything. The manned up defensive back has to follow him, and that middle safety is no longer keying to the trips, because he has just 2×2 to worry about now and needs to take care of the middle third.

That leaves Clemson with a cornerback and one-high safety over Jeremy Ruckert and Jaxon Smith-Njigba. There’s no longer a numbers advantage. That means that when Ohio State slips Trey Sermon out into the flat, Clemson is without a defender to account for him. Ohio State has created even matchups across the board, and freed up an unguarded checkdown target for Fields in the process.

Here’s another one. Pre-snap motion to create an easy back side throw against an overzealous Clemson defense. This time Ohio State motions to the field, leaving just one wideout to the boundary, which Clemson matches with just one defender, a cornerback in press man. To match the trio of receivers to the field, Clemson dedicates an outside cornerback, an inside corner and a safety to the field. Ohio State sprints Fields towards the strong side of the formation, further selling the defense to bite in that direction, which draws the attention of both linebackers and the back side safety, who all sell out to stop a pass to the bunch.

From there, it’s an easy leak concept for Fields to Ruckert, who just has to sneak behind the defense.

This was the guiding force behind so much of Ohio State’s success in the passing attack against the Clemson defense. Because this is a defense built so heavily around reacting to whatever an offense is doing prior to the snap, Ohio State was able to create massive gaps in the defense by forcing pre-snap overreaction. You get it one more time here. Same idea: motion to shift the strength of the formation, and then a route against the grain, into the part of the defense weakened by that pre-snap motion.

To make those misdirection looks more difficult to deal with, Ohio State added in a few shot plays to the lone wideout on the weak side of the field, forcing the back side defenders, usually a cornerback and a safety, to respect that route, holding them in place and preventing a quick recovery in response to a tight end or halfback slipping into the back side of the defense. With very little in the way of help over the top, however, Ohio State was still able to find success beating Clemson vertically in these one-on-one matchups, even without the extra work of scheming these routes wide open. That’s the benefit of an elite quarterback and very quick wide receivers.

Really, in all, it’s the exact style that seems to best fit this personnel grouping in the Ohio State passing game. After spending so much of the season focusing heavily on just two primary receivers, an expansive plan of attack that forced the defense to respect five targets on every single play just seems to suit this group so much better. Olave and Wilson are obviously the stars here and deserve the reps that go along with that title, but using Ruckert or Sermon or Jameson Williams as a secondary threat allows Ohio State to open up so much more of its passing attack. The Alabama defense may not prevent as serious a challenge as the Clemson group did, but a continuation of this form in the national title game could go a long way for securing a championship for the Buckeyes.