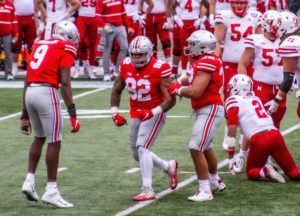 There seemed to be a collective moment of distress among Ohio State fans when Nebraska darted through the Buckeye defense like a hot knife through butter on the opening drive of the 2020 season. The stands were all but empty in Ohio Stadium on Saturday, but it’s easy to assume that you still would’ve been able to hear a pin drop in the Horseshoe were it filled after Adrian Martinez capped a four-play, 75-yard drive with a 10-yard read option keeper that saw him split the Buckeye defense with ease.

It’s easy to understand the panic. Ohio State’s defense was beaten as badly on that first drive as it was at any point in the 2019 season, and it was beaten in ways that looked eerily similar to those that plagued the infamous 2018 group, with big gains on the ground and defenders wildly out of position. After struggles in that same mold through the first four or five Nebraska drives of the game, it looked as though the loss of Jeff Hafley would be much more impactful than many expected entering the season.

Then, just like that, everything stopped working for the Nebraska offense that had been absolutely electric on the first drive and provided several big plays for the Buckeyes to fret over in the first 25 minutes of the game. After Nebraska tied the game at 14 with just over eight minutes to play in the second quarter, the Silver Bullets seemed to lock in and return to form. On Nebraska’s first four drives, it ran 22 plays, gained 176 yards and scored 14 points, good for 8.0 yards per play (YPP) and 0.64 points per play (PPP). On its last eight, it ran 34 plays for 201 yards and three points: 5.9 YPP, 0.09 PPP.

What changed that helped the Buckeyes adapt to and eventually slow down the Nebraska attack? Was this a scheme issue, a personnel issue, or just cobwebs from a bizarre offseason?

As per usual in football, the answer is somewhat of a combination of all factors. Ohio State was sloppy in the early game, which can certainly be attributed to some offseason rust, but there were also scheme and personnel issues that were all but fully addressed after those first four drives.

See, the main issue that Ohio State had on that first drive and early in the game was with its approach to handling pre-play motion. This was a big problem for the 2018 group as well, because offenses would show off pre-play motion that an Ohio State defender would track across the field, and then the offense would attack the space vacated by that defender, with no one filling in for the space he left on the field. It was a scheme problem then, and a scheme problem that Greg Schiano never really addressed, because that’s how his system manages motion. Overreactions to motion were built into that defense.

The same cannot be same of the current coaches on Ohio State’s staff. Greg Mattison showed last season that he deals with motion through shifts rather than individual reactions, as is traditional in a zone-heavy scheme like that the Ohio State wants to run, and Kerry Coombs has no real reason to go against that. That would indicate that Ohio State had some miscommunication issues early in this game, because Nebraska’s initial success was almost entirely tied to Ohio State’s motion issues.

On just the second play of the game, one of those overreactions shows up. Nebraska motions Dedrick Mills into the backfield from the short side of the field pre-play, to set up for a pretty basic designed quarterback keep. The goal here is to stretch Ohio State out with trips on the back side, pulling at least three defenders away from the play. Nebraska gets four, with Tuf Borland, two cornerbacks and a safety all dedicated to deal with the wideout trio. That leaves seven defenders for Nebraska to account for, including three in the lane that it would like Martinez to run into: Pete Werner, Josh Proctor and Sevyn Banks. The other four remaining defenders are linemen and can be washed away by zone blocking from the offensive line.

So, how do you deal with three loose defenders in the lane you’d like to run to? With motion. That motion into the backfield pulls Werner and Proctor inside, and the fake to Mills brings Werner even deeper in, to the point where he’s almost caught in the line. Proctor is focused on the hard release from Kade Warner because Banks is blitzing, which leaves Banks as the only player there on the perimeter with the ability to make a quick play on Martinez. He doesn’t, and Werner has to eventually track back to bring Martinez down, well after he’s picked up the first down. This is a direct result of poor eye discipline from Werner, and much more of a rust issue than anything else.

Ohio State was again caught flat-footed by misdirection on the next play, this time against a counter run from Luke McCaffrey. The motion is a factor but not as significant this time because Ohio State actually shifts further into the designated path of the play. The issue here is still just eye discipline and over-pursuit.

The entire front seven falls for the counter, and Baron Browning literally falls, creating a ton of run on the outside for McCaffrey to run to with so much of the defense taking a hard first step inside to stop what looked like inside zone upon first read.

While Werner and Browning seemed to struggle with that eye discipline, it was actually inside linebacker Tuf Borland, considered by the coaching staff to be the leader of the defense, that was seemingly the most confused by pretty simple pre-play motion. He either didn’t know his assignments or was given bad ones, because he was consistently out of place early in the game as a result of overplaying motion.

Here, with three defenders already on that side of the field, he follows the motion to the edge of the hashmarks, vacating the middle of the field, which Martinez is designed to run directly into, because Nebraska was operating under the assumption that Borland would overreact to the motion. By the time he gets back into position, Martinez is already moving, and Borland misses the tackle about as badly as you can possibly miss a tackle.

Same story here, this time in the passing game. Nebraska is running mesh with a tight end dropping in behind the drag routes, right in the middle of the field. He’s left completely uncovered because Borland abandons that zone to watch the halfback motion, which should fall to either Browning or the outside cornerback, depending on where the running back actually goes after the ball is snapped. Nebraska throws right into the space that Borland left, and has another easy first down. A freshman linebacker would be given a sideline talking to for this kind of play, and this is Borland’s fifth season in the program. Ohio State made some adjustments later in the game to cover these kind of mistakes, but at some point the personnel on the field has to take some of the blame for these issues happening repeatedly, under several defensive coaching staffs.

The main fix was just in calming down the reaction to pre-play motion. After starting the game by aggressively tracking all of this movement, Ohio State settled down in the later quarters and returned to the kind of slight shifts that it used to manage motion under Hafley. Instead of track across the field, Ohio State’s interior players delegate the motion to to the outside cornerback and slide one interior player out to account for the numbers that Nebraska now have on that side of the field, but much of the defense stays right where it is.

Because of that, Nebraska’s run away from the motion loses its effectiveness. Sacrificing a potential blocker by motioning away from the play side only works when that potential blocker influences defenders. When a defense pays little mind to misdirection, it stops working. This was Ohio State’s approach in the latter half of the game, and it led to a return to something that looked roughly like the dominant 2019 group. The personnel has changed, and there certainly seems to be both rust and athletic limitations among parts of this defense, but the fundamental scheme still works when run correctly, be it with Hafley or now with Coombs at the helm.