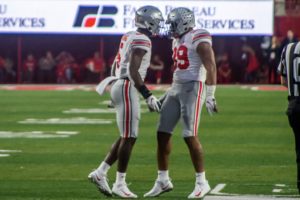 Ohio State was faced with what many expected to be its first true test of the season on Saturday night against Nebraska. The Cornhuskers may not be what they once were, but a tough home environment, an interesting young coach, and an intriguing, electric offense led by a very good quarterback seemed to be the ingredients needed to challenge the surging Buckeyes.

Instead, Ohio State did to Nebraska as it has done to every opponent through the first five games of the season: dismantled them, in a calm, collected, devastating fashion. Ohio State looked tremendously well prepared, and to be so ready for a game with the caliber of athletes Ohio State has is usually a recipe for a blowout. In the case of Saturday night, the Buckeyes passed their first test with flying colors, 48-7.

While Ohio State’s offense deserves a ton of credit for excellent play design and game planning, putting 48 points on this Nebraska defense is not exactly the most difficult thing in the world. Much more impressive, and much more consequential in the massive win was the Buckeye defense. Nebraska’s offense, led by explosive quarterback Adrian Martinez, has the potential and the ability to put up points and yards in bunches, and Ohio State’s defense completely shut it down.

The domination started for the Buckeyes from the very first drive, with Ohio State flying to the ball on a swing pass just a few plays into the drive.

This is a familiarly unique look for Ohio State’s defense, and a look that defensive coordinator Greg Mattsion has showed off a couple times. Ohio State is serious about liking Pete Werner enough to use him as a safety on occasion, and the Buckeyes do it here to great success. The point here is to bring the same amount of pressure as usual, but to make it look different enough to simulate a blitz, even with seven defenders dropping into coverage.

To do that, Ohio State loves to bring Shaun Wade in from his usual safety spot and put him on the edge, to overwhelm the right tackle. Jordan Fuller moves into Wade’s spot, Werner into Fuller’s, and Chase Youngs drops into Werner’s zone across the middle. Nothing new is being created here, but Ohio State is giving the illusion of pressure, and that’s enough to both confuse the offensive line, and force Adrian Martinez into throwing to a spot that just isn’t open.

The second component of this play is in the back four, and that’s actually where this false opening comes from. Jeff Okudah, Werner and Damon Arnette are all dropping into deep third on this cover 3, and making it as obvious as possible before the play so that Martinez will read an opening in the flats. As soon as he makes that read, and puts the ball exactly where Ohio State wants him to, Okudah and Fuller are able to fly to the ball and create an immediate stop. Ohio State isn’t doing anything complicated here, but the misdirection makes this pretty much impossible to read for a young quarterback like Martinez.

On the next play, Ohio State gets Martinez again, and baits him into an interception.

This is mostly a man coverage look, with two corners in press coverage on the outside, and Okudah as the dedicated coverage man on Wan’Dale Robinson to keep him under wraps. The coverage all over the field is rock solid here, and with a zone across the middle from Malik Harrison, Martinez is really unable to throw what was supposed to be a quick hitter. The defensive line forces him outside with a great stunt from Chase Young, and Okudah make a great play in coverage. Nebraska was expecting a zone here, and this play never had a chance against man coverage, but Martinez didn’t have the time in the pocket to move off of his first read, which is almost always Robinson underneath.

On the next drive, Ohio State put up a similar effort in coverage to force a change of possession, though this time the pass rushers got home and forced a punt.

This is another man coverage look to answer Nebraska’s three receivers on the strong side of the play, and once again, Ohio State’s cornerbacks look excellent and confident, knowing that they have help in a zone across the middle. Because of that coverage, Martinez isn’t able to hit a quick pass, and by the time he starts looking elsewhere, the defensive line has surrounded him. From there, Baron Browning just has to make a quick jump from his zone to make the easiest sack he’ll ever record.

The only real success that Nebraska had all night against Ohio State’s starters came on the third drive of the game, when the Cornhuskers completely switched up their offense and essentially attempted to run option all the way down the field, out of wishbone and I-formation looks.

Both of these plays are essentially a result of confusion. Nebraska has really never shown this look, and Ohio State has never seen it. Neither play is really worth breaking down further, because the Buckeyes aren’t going to see this again this season, and the success of these plays was almost entirely because Ohio State just didn’t know this was coming. After a timeout, the Buckeyes adjusted, sent out a 4-4 front to answer, and immediately forced an interception.

Martinez was again rushed here, and without a ton of time to throw, he just makes a bad pass. This is actually a pretty cool play that Nebraska runs, and Robinson was at least somewhat open, but Ohio State does a good job of making this difficult enough that Martinez can’t make a play.

After the brief return to 1995 for the Huskers, the next drive saw a return to the usual approach, and just as they were before, the Buckeye defense was all over it.

While quite a bit of Ohio State’s success was scheme based on Saturday, there are still plays like this one from Shaun Wade. The play design is fine, the scheme is fine, but this is just an elite player making an elite play. There’s very little that can be done about that from Nebraska’s perspective.

The next play sees Martinez make his third big mistake of the day, again because of pressure and because of confusion about what Ohio State is showing him in coverage.

The Buckeyes drop into their base cover 3, but Shaun Wade trails behind No. 19 because no one enters his zone. That slight change is just enough to fool Martinez, who is again dealing with heavy pressure. He overthrows his man, and Jordan Fuller is right there in his deep center third to make a great play on the missed throw.

Perhaps the most impressive part of Ohio State’s performance on defense was the way the Buckeyes handled Nebraska on third down.

On most standard downs, the Buckeyes gave Nebraska the base, cover 3 look, forcing the Huskers to find opening underneath, which, for the most part, Martinez didn’t have the time or wherewithal to do. Then, on passing downs, like this one, the Buckeyes would switch into a man coverage look with at least one spying linebacker, while all four defensive linemen sell out to rush the passer. It worked well here, just as it did all day. The coverage is good, the rush is good, and Martinez runs right into the spying Harrison.

The final two plays before Ohio State shifted mostly into garbage time should be talked about in tandem, because they’re very similar plays.

The first of the two comes from Nebraska’s traditional spread. Robinson motions into the backfield and takes the ball on a sweep, looking to loop right around the tackle. Ohio State’s linebackers shift with the motion because the Buckeyes are in zone on third and short, rather than man (this would have never, ever happened last season). Because of that shift, Malik Harrison is able to hold off the wide receiver looking to clear out room, and middle linebacker Browning has wide open space to fly in and stop Robinson far short of the first down marker.

The second is basically the same idea, out of I-form rather than from motion. Robinson is still trying to slip off the tackle, though this time he’s doing it with extra blockers on that side in the form of a tight end, fullback and a pulling guard. Ohio State’s linebackers again shift, and with the defensive line filling up any cutback lanes, the responsibility shifts onto the linebackers to open up a lane for tacklers.

Justin Hilliard does that this time, taking out the guard, while Tuf Borland absorbs a hit from the fullback. Because Ohio State is in the 4-4- front again here to counter the I-Form look, Pete Werner is still there, and left completely unblocked. He blows up the running back, and turns what could have been a massive play into a two yards loss.

This play is as representative of the changes Ohio State has made defensively this season as any play all year. Firstly, this is a play created by great preparation and game planning, including an in-game adjustment to add the 4-4 look in as a counter to what Nebraska was doing. Secondly, every Buckeye knows his role. There are no blown responsibilities here, no mistakes, and no missed reads. Everyone is gap sound, and the final product is a perfectly executed play.

Lastly, Pete Werner makes a head on tackle, and never looks shaky doing it. There’s no threat of a missed tackle, no possibility of a huge play or broken tackle, and even if there was, three other linebackers are right there to clean it up.

All of that, from the scheme and the prep to the usage of personnel and execution on the field are complete, polar opposites from what Ohio State did last season on defense. This is a completely different defense under new management, and until further notice, this is a national title caliber group.