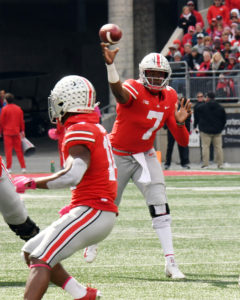 Ohio State struggled to run the ball but got enough from third-year sophomore quarterback Dwayne Haskins to defeat the determined Minnesota Golden Gophers 30-14 at Ohio Stadium on Saturday.

Haskins threw three touchdown passes to give him 28 for the season.

Haskins, for the second straight game completed 33 of 44 passes. After passing for 455 yards vs. Indiana in the previous game, he had 412 yards on the Golden Gophers (3-3,0-3) with 187 of them going to Hill on nine catches. Parris Campbell eight catches for 56 yards.

OSU gained only 92 yards on the ground, led by junior Mike Weber’s 51, and averaged 2.9 yards per carry after a 3.2 mark vs. Indiana. Sophomore J.K. Dobbins added 35 yards on 10 totes and Haskins got six yards on nine runs.

Mohamed Ibrahim had 105 yards on 14 carries through two quarters and finished with 157 yards for the Gophers.

Minnesota (3-3, 0-3) true freshman QB Zack Annexstad was 13 for 22 for 218 yards and two interceptions.  Tyler Johnson was his favorite target with eight receptions for 119 yards.

Ohio State took an early 3-0 lead after junior Kendall Sheffield intercepted Annexstad on the fourth play of the game at the OSU 13. The Buckeyes went to the Minnesota 4 but a pass to junior Austin Mack was broken up and sophomore Blake Haubeil, replacing injured senior Sean Nuernberger, kicked his first career field goal, a 21-yarder at 9:03.

Ibrahim out of the shotgun rambled 25 yards on a third-and-3 to the OSU 43. Annexstad later passed 14 yards to Bryce Williams to the 18. Wide receiver Seth Green took three snaps to gain 17 yards and Ibrahim ran in from the 1.

OSU got a good start to its next series when Weber’s 8-yard run was followed by a 15-yard face mask penalty to put the ball at the Ohio State 48. Five plays later Haskins threw a 41-yard touchdown pass down the middle to Terry McLaurin for a 10-7 lead with 1:07 to go in the first quarter. The drive was six plays, 75 yards and 2:37 off the clock.

Minnesota was unfazed and on its first play from scrimmage Johnson had a 29-yard reception to the OSU 46. After two plays gained nothing, the Gophers got a break when freshman cornerback Shaun Wade was flagged for pass interference, setting Minnesota up at the OSU 31.

Johnson had two more catches that moved the Gophers to the 5. Green ran for a pair of yards over right guard and Ibrahim capped the nine-play, 75-yard, 4:14 possession with a 3-yard run to give Minnesota a 14-10 lead with 11:53 left in the second quarter.

OSU after the touchback was driving to retake the lead, but the 11-play drive ended on downs when Dobbins lost a yard on fourth-and-1 from the Minnesota 17.

Ohio State got the ball back after Johnson made a catch at the OSU 32 and Wade forced a fumble that sophomore cornerback Jeffrey Okudah recovered at the 24.

Haubeil added to the lead at 7:10 of the third quarter on a 47-yard field goal. OSU began the series at its 47 after a punt but couldn’t take advantage of two catches by Parris Campbell totaling 23 yards.

Ibrahim had runs of 20 and 12 yards and Johnson a catch for another 18 yards but a third-down pass knockdown by junior linebacker Justin Hilliard forced a 32-yard field goal try by Emmit Carpenter that was wide right and the Gophers got nothing for running 6:04 off the clock.

Ohio State didn’t get any breathing room until Haubeil’s 27-yard field goal made it 23-14 with 10:20 to play. It was a disappointing end to a 71-yard drive that was saved by a third-down and 13 catch of 17 yards by junior Austin Mack to the OSU 34.

Hill added a 22-yard catch-and-run, sophomore tight end Luke Farrell had a 24-yard catch and Campbell another reception for a first down at the 12 but two passes to him netted only three yards and Haskins missed Hill on third down.

Minnesota looked to strike back and opened its next drive with a flea-flicker from Annexstad to Bryce Withan for 41 yards to the OSU 34. The Gophers went the air on the next play and sophomore safety Isaiah Pryor made the interception at the 2 with 9:25 left.

The Gophers had another opportunity to cut into the deficit but Carpenter missed a three-pointer from 49 yards with 5:46 left in the game.

The Buckeyes took over and Haskins soon tossed his third TD, second to Hill, to close the scoring.