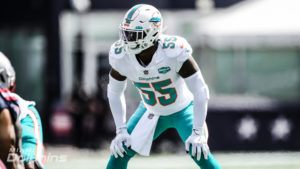 In the first week of the 2020 NFL season, there were plenty of strong performances to be found from the 50 former Ohio State players that are on active rosters.

Here are the eight that stood out as the most notable, with the list including some strong rookie debuts, a major comeback win and an impressive statistical output on the defensive side of the ball.

Clutch tackle on fourth down by Jordan Fuller 💪 @J_Fuller4 #RamsHouse

The first of many 💪