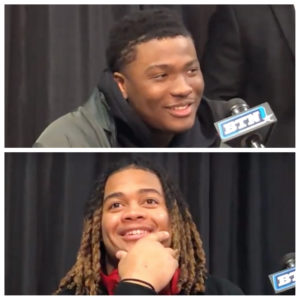 Before the No. 10 Buckeyes (10-1, 7-1)pulled out their 52-51 survival of the Terrapins (5-6, 3-5) in overtime and spilled onto the field to celebrate, Haskins and Young helped them immensely on several key stretches of the come-from-behind victory.

For the pair of Maryland products — Haskins from Potomac Bullis School and Young from Hyattsville DeMatha Catholic — the homecoming of sorts to College Park added fuel to the fire as they sparked their team to the hold on for its latest Big Ten win.

Haskins, who was committed to UMD before he flipped his pledge to OSU late in the 2016 recruiting cycle, showed the home fans among the announced crowd of 38,177 at Maryland Stadium what they would have gotten had he stayed home.

“Just being able to play in front of my family and my friends and, of course, people that I grew up with and played against in high school and were in the same class together,” said Haskins, who called it a “really special” win with those aspects in mind. “Knew a lot of kids on the team so it meant a lot to me to go out there and play today.”

His 28-of-28 passing (73.7 percent) for 405 yards and three touchdowns to one interception torched Maryland’s defense, and he added three rushing touchdowns with 15 carries for 59 yards to make the difference as Ohio State’s offense came to life.

“Probably just that competition, being back home, having those guys talk smack to me,” Haskins said. “I can run, I guess today was the first day I wanted to show I could.”

Young, on the other hand, was always committed to Ohio State and his pledge never wavered prior to when he arrived in Columbus as a member of the 2017 recruiting class.

Young had his best game since the Buckeyes’ 27-26 win at then-No. 9 Penn State, bringing a bright spot to an otherwise dark day for the defense as he got into the backfield for two sacks and three tackles off the edge.

“(Defensive line coach Larry Johnson) just said, ‘That’s your moment,'” Young said. “You’ve got to show up in a big moment. Talking whole D-line. I guess I just made the play like I did during Penn State. But the whole defense as a whole, that last stretch, we played real good. So that’s a credit to (defensive coordinator Greg) Schiano and everybody.”

OSU had trouble slowing down the Terrapins’ Anthony McFarland, also from DeMatha Catholic in the 2017 recruiting cycle, who gashed Young’s unit with 21 carries for 298 yards and two touchdowns, but emerging from the slugfest with a win mattered most as next weekend against No. 4 Michigan (10-1, 8-0) looms.

“I think we definitely have got to improve on a lot of things,” Young said. “But just knowing that my brothers are going to fight to the end, that they’re always going to have my back and I’m going to have their back, that’s a good feeling going into this (Michigan) game.”