Division Round Update: Buckeyes in the NFL Playoffs 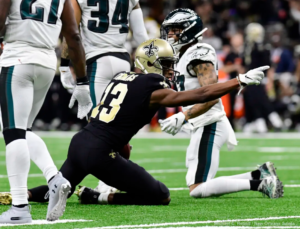 Seventeen Buckeyes entered the Division Round of the NFL Playoffs, only nine remain. Whether they advanced or lost, many Buckeyes played pivotal roles for their respective teams, representing the Scarlet and Gray at the game’s highest level.

In a game featuring eight former Buckeyes, the Saints pulled off the biggest playoff comeback in franchise history, scoring 20 unanswered points to defeat the Eagles, 20-14.

Philadelphia safety Malcolm Jenkins recorded a game-high 10 tackles (eight solo), including two tackles for loss against him former team, with whom he won Super Bowl XLIV. Punter Cameron Johnston punted five times for an average of 48.2 yards for the Eagles.

Dallas running back Ezekiel Elliott struggles to find much running room against a stout Rams’ defensive front, carrying 20 times for 47 yards and one touchdown. The two-time Pro Bowler also brought in 2 of 5 targets for 19 yards and another touchdown. Elliott’s backup, Rod Smith, did not record a touch for the Cowboys. Wideout Noah Brown hauled in his lone target for 13 yards and added one tackle in a 30-22 loss to the Los Angeles Rams.

Long snapper Jake McQuaide is the only former Buckeye on the Rams, who will travel to the Mercedes-Benz Superdome in New Orleans to take on the Buckeye-laden Saints for a shot at Super Bowl LIII.

In the AFC, the Patriots dominated the Chargers early and held on to win, 41-28, in Foxborough, Mass. New England was able to keep Charger defensive end Joey Bosa in check, limiting him to just one assist.

The Pats advance once again to the AFC Championship Game, their eight consecutive appearance. New England must travel to Arrowhead Stadium in Kansas City, Mo., where the Chiefs await.

Kansas City represents the only team to make the NFL playoffs without any Buckeyes on its roster. The Chiefs defeated the Colts in the divisional round, 31-13, while Indianapolis defensive starters’ safety Malik Hooker and defensive end Tyquan Lewis were inactive due to injuries.

Below are the scheduled games, including which former Buckeyes to look out for: