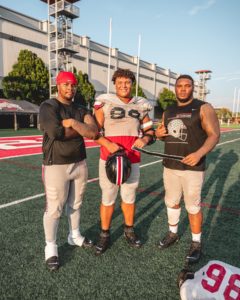 Kanu did not appear in Ohio State’s season opener against Notre Dame but played a combined 14 defensive snaps against Arkansas State and Toledo. Kanu joined the Buckeyes as a four-star recruit out of Rancho Santa Margarita, Calif., and ranked as the No. 129 overall player and No. 19 defensive lineman in the 2022 class, according to 247Sports’ composite score.

Kanu is the second defensive lineman to shed his black stripe since the spring, as first-year defensive end Kenyatta Jackson lost his on Aug. 20. He joined cornerback Ryan Turner as Buckeyes to complete the tradition on Sept. 22.