Defending Champion Carmen’s Crew Upset By House Of ‘Paign, 76-68, In Opening Round Of The Basketball Tournament 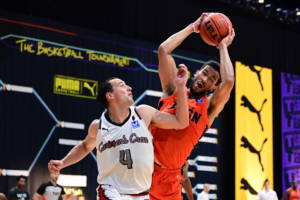 One year after winning its first championship, top-seeded Carmen’s Crew was knocked off by No. 16 seed House of ‘Paign in the first round of The Basketball Tournament at Nationwide Arena on Wednesday evening.

One of the best games in TBT HISTORY pic.twitter.com/khLMBsCzxF

The Ohio State alumni team got off to a slow start, hitting just five of their first 17 shots from the field and one of seven shots from three-point range while falling behind 19-15 after one quarter.

That deficit grew to as many as 11 points in the second quarter, but Carmen’s Crew came roaring back with a 17-4 run to take a 37-35 lead, which included a trio of three-point shots from former Ohio State guard Jon Diebler.

Carmen’s Crew took a five-point lead into the half, but point guard Aaron Craft went down with a knee injury while diving for a loose ball early in the third quarter. House of ‘Paign — an Illinois alumni squad that also featured South Dakota State alum Mike Daum — took advantage of his absence and went on a 16-2 run of their own to take a 58-56 lead heading into the final frame.

That was simply too much for Carmen’s Crew to overcome, even with Craft returning to the floor, as House of ‘Paign led all the way to the four-minute mark of the fourth quarter. That set off the Elam Ending, during which they scored eight of the final 12 points to reach the target score of 76.

Daum, who played against the Buckeyes in the 2018 NCAA Tournament, led all scorers with 23 points. He also added a team-best right rebounds.

Forward David Lighty scored 21 points in a losing effort for Carmen’s Crew, while Diebler was the only other player in double figures with 11 points. Craft, on the other hand, finished the game with a modest four points, seven rebounds and five assists.

“Give them a ton of credit,” Craft said. “They played great. They stayed with it. That’s a great team.”

We’re sorry we let you down Buckeye Nation. That’s the great thing about @thetournament though. Sometimes you get hot, other times you don’t. Your support has meant everything to us. We’ll be back! 🌰🌰🌰

Following Wednesday’s results, former Ohio State center Trevor Thompson is now the only Buckeye remaining in the tournament. He plays for the Dayton alumni team, Red Scare, which knocked off Big X earlier in the day.