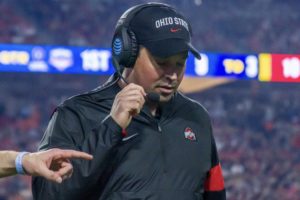 What is Ohio State head coach Ryan Day’s offense? It’s a question that seems to float around the outside of the Buckeye program, be it in media circles or among fans, but it’s not one that’s frequently addressed, primarily because it can’t be answered simply or succinctly. It requires context and a modified history lesson.

In other words, any look at this offense has to start with Day’s first four years with the Buckeyes. The “Day offense” has shifted pretty wildly in each of those years, making it hard to pin down. That’s by design.

Day is a personnel-based coach, not an ideologue like Urban Meyer or Chip Kelly, his primary mentors and two of the most committed “spread option” coaches in America. He has his staples and his concepts that he likes and that you can expect to see every season, but the Ohio State offense is shaped not by an ideology but by the players who make it up, starting and ending with the signal caller.

“I would say that Coach Day does a great job developing our offenses based on personnel, and our personnel will be indicative of how these guys work and how these guys execute,” said wide receivers coach Brian Hartline. “To take one guy off the field and put another on, that guy better be of equal value if not more value.”

Day has even said so himself, which is especially impactful this season. With a three-man race for the starting quarterback spot, Ohio State’s offense won’t take its full shape until it has its starting signal caller. However, Day shrugs off the idea that Ohio State’s offense is changing radically from year to year and frames changes as a shift in emphasis rather than a full-scale playbook change.

“They’re three different quarterbacks. Now, they are very similar, but I think all three have different strengths and weaknesses, so as we go into a game, we’re certainly going to do the things that they do best. Some of them do get the ball out of their hand quickly, and that’s good. I think they do have good accuracy underneath, but I also think that they do a decent job throwing down the field as well. In a perfect world you’d like to do a little bit of both, but again, the strength of college football coaching is to find out what they do really well and emphasize that.”

That makes a lot more sense than creating a new playbook each season. Play installation takes time that the Buckeyes don’t have, so the changes from year to year are more in identifying which part of the Day playbook best fits the players in it and leaning heavily on those looks.

With Barrett at the helm in 2017, the Buckeyes stuck with what had been working for years under Meyer, while adding in a passing attack that complemented Barrett’s best traits as a passer. The focus was still on the ground game, with Barrett, J.K. Dobbins and Mike Weber teaming up to create an electric zone-running attack that still featured plenty of the quarterback run and option. However, Day introduced quick-hit air raid concepts (plays that are designed around short throws to get the ball out of the quarterback’s hand quickly), intermediate play action and RPOs, all of which have one big thing in common: Their success is often determined not by arm talent but by processing ability. Barrett had the latter in droves but was seriously lacking for the former after his ankle injury in 2014, so the Buckeyes leaned into it. Day looked to get the ball out of Barrett’s hands quickly and trusted him to read the defense before and after the snap to get the ball to the best option, based on what those reads told him.

He excelled at it. Ohio State lacked a strong downfield passing game, but Barrett reapproached his freshman-year production and looked much more confident than he had in 2015 or 2016, fitting comfortably into the 15-yard range that Day generally placed him within. Anything beyond that was shaky for the senior, but he led a strong passing attack through screens, slants, drags and quick passes into the middle of the defense, often over linebackers fooled by play fakes.

With Haskins at the helm in 2018, the quarterback running game essentially vanished, as did the option at large, which caused a lot of problems for the rushing attack. But Day also emphasized more air raid concepts, riding mesh (two deep routes to the perimeter, with a pair of drag routes underneath), Y-cross (one go route on the perimeter, one deep post, two underneath routes) and deep play-action shots to a pass-first attack with a quarterback who could handle it.

Like Barrett, Haskins was able to process quickly enough to make plays underneath, but his arm talent allowed for Day to open up the playbook down the field while cutting out some of the screens and intermediate game, though not removing it entirely.

The running attack re-emerged in 2019 with the introduction of the outside zone, a staple of offensive coordinator Kevin Wilson that had seemed to leave the playbook with Barrett and Haskins at the helm. Although Fields was certainly a capable runner, that outside zone play (see graphic) provided the Buckeye rushing attack with a credible outside threat that kept the defense from packing the box – as it had against the inside zone-heavy 2018 Buckeyes – without forcing Fields into Barrett-esque running responsibilities.

In the passing game, Fields had perhaps the best arm of the bunch, a rapidly improving wide receivers room after the hiring of Hartline and a strong line, so Ohio State shifted further into those longer developing attacks that Day had started to toy with in 2018, while the short passes began to vanish from the offense. That approach remained in the passing game in 2020, albeit with an increased focus on the star receiver duo – and for good reason, given the ability of Chris Olave and Garrett Wilson – while the rushing attack moved away from the outside zone again as it struggled to find a capable runner outside of the tackles.

That’s all an oversimplification for the sake of translating Day’s system into something legible for that average fan or analyst, but generally speaking, it’s a fair summary of the “Day offense” as it stands entering 2021. It all provides the stage for the question that will determine Ohio State’s season, revolving around the variation of the offense that Day throws out this fall.

Based on what is known about his playbook, his roster and the quarterbacks in the battle (admittedly, not much on that last front), it’s fair to make a few educated guesses.

First, the passing attack is probably going to constrict a bit, at least to start the season. C.J. Stroud, Kyle McCord and Jack Miller can’t be fairly expected to replicate the production or talent of someone like Fields in their first year as a starter, and Day doesn’t sound like he has any interest in asking them to.

“When you’re just starting and you’re learning to play the position, you can’t do anything out of the ordinary,” Day said. “You can’t try to do things other than make the routine plays routinely. Why? Because you have a really good offensive line, really good tight end, really good receivers, solid backs.

“We’re hoping early on that, with the talent that’s around the quarterback, if he can just keep the offense moving and get the ball into the right skill players’ hands and keep the chains moving, then that’s a great start.”

That likely means a reduction of those long-developing shots down the field and a return of the shorter stuff, be it those air raid concepts, screens, RPOs or all three. The starter will need to move beyond that eventually, but to start, expect a passing game much closer to the one the Buckeyes used in 2017 than the 2020 rendition.

For the first time in Day’s tenure, that could also mean an introduction of the running back into the passing game as a serious and consistent option. Ohio State has teased that before and got Dobbins involved at a decent clip in 2019 but has rarely looked to the backfield for receiving threats. With a pair of excellent pass catchers in the room in Marcus Crowley and TreVeyon Henderson, it doesn’t seem out of the realm of possibility that Ohio State makes that move to help ease its new quarterback in this season.

“We’re always looking for versatility at the running back position, and when you can run the ball physically and finish runs, you can pass protect, and then the other part is that you can go run routes,” Day said. “When you can do those three things, you become very valuable on offense and you become a weapon. Our guys are doing that. You can see when we throw the ball, that if the defense wants to get in zone, we can check the ball down and that’s getting a really good skill player the ball in space.

“That’s what we’re trying to do ultimately. Whatever the scheme is, we want to create as much space as we can, and that’s just another way to do it. It’s not something we’ve done a ton of here, but with the quarterbacks that we have, that’s something that we think we could look into more.”

Wilson’s rushing attack is a bit trickier to pin down because of the questions surrounding the starting running back position. Those questions exist at quarterback too, but all three competing there are similar, while the running backs vary dramatically.

However, the Buckeyes are a zone-running team at their core and will lean heavily on the inside zone as their No. 1 option. With someone like Henderson or Crowley, the outside zone could be in for a re-emergence, and because of the presence of a pair of strong blocking tight ends in Mitch Rossi and Cade Stover, Wilson has hinted at the addition of counter looks into the rotation.

“We’ve always run the counter, but the problem is, how many plays can you emphasize?” Wilson said. “In the run game, with all the formation variation, it’s hard to get really good at about more than three or four plays. And the counter has usually been play No. 4, 5 or 6 on the menu when it came to practice. In spring, we thought we’d try to practice it a little more.

“With Mitch Rossi, who’s a hybrid fullback, and Cade Stover, now sometimes we’re doing the counter play not just with the guard and tackle, but with the guard and the second puller as a tight end hybrid. I thought it fit those two guys a little bit. We didn’t do it a lot, but we did it the last couple weeks, and because we did it at the end, we ran it in the spring game a couple times.”

However, as is always the case with Day, it’s going to come back to personnel. As it stands in June, the answers there are about as clear as they were in February