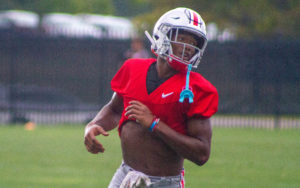 In some aspects, it was strong, with punter Drue Chrisman staying among the nation’s best, and Blake Haubeil showing improvements after taking over for Sean Nuernberger in the middle of the season.

But in the return game, there was not much success to be found.

Using a handful of players for both punt and kick returns, the Buckeyes finished in the bottom half in both for average yards per return, averaging eight yards per punt return, No. 74 in the NCAA, and 17.8 yards per kick return, which was all the way down at No. 113 in the country.

With all that in mind, head coach Ryan Day announced four players who will be the primary returners for Ohio State this season.

Three of the returners he named found time returning a season ago: wide receivers K.J. Hill, C.J. Saunders and running back Demario McCall being on Day’s list of players he expects to rotate to start the season before he sees in-game results.

Hill finished 2018 with 76 punt return yards, the most on the team, and only four kick return yards.

Saunders’ 50 yards on punts was No. 2 on the team, and the 24 kick return yards was third.

McCall had the third-most punt return yards with 32, but he found more success on kicks, finishing with 195 yards, only trailing Johnnie Dixon’s 240.

But the fourth name Day listed is a new one: freshman wide receiver Garrett Wilson. In high school Wilson had 813 kickoff return yards and 114 on his punt returns throughout his four years. The 114 yards came on only five returns, good for 22.8 yards per return.

In his senior year of high school, Wilson fielded 10 kickoffs for 364 yards, with a long of 93 yards.

There is no word on who is the starter on either side yet, but after a lackluster return season in 2018, Day will likely go with what he sees this season rather than relying on the past numbers to tell him anything.