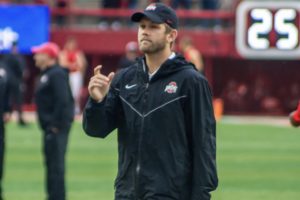 In Ohio State head coach Ryan Day’s first time talking to the media, not just since the loss to Clemson in the Fiesta Bowl, but also since the promotion of quality control coach Corey Dennis as the new quarterbacks coach, Day discussed the decision to hire from within the program instead of looking elsewhere.

Day said the decision came down to keeping the same style in the quarterback room, as well as the want to keep a talent like Dennis within the Ohio State system.

“I wanted continuity. So I knew Corey is invested here for a while. That was certainly important,” Day said. “I think when you’re dealing with a quarterback, for me, it has to be done the way that we’ve done it here. And when someone else starts bringing in their different opinions or we read it this way, we don’t have time for that. We know what works here. We have a system in place that’s really efficient. We feel strongly that we know how to develop quarterbacks.”

The familiarity with the offense Ohio State runs — an offense that ranked No. 4 with 529.9 yards per game and No. 3 with 46.9 points per game — is what made the decision easy for Day as to who he wanted to replace Mike Yurcich, who is becoming the offensive coordinator at Texas.

That continuity Day was striving for comes in Dennis, a guy who has been with the head coach since day one in Columbus.

“Since I got here Corey’s kind of been my right hand man. And he’s kind of, right from the beginning, from when I got off the plane that first time we were kind of together,” Day said. “We’ve spent a lot of time in that meeting room together. And he knows exactly how we teach things. And he’s got a tremendous relationship with the quarterbacks here. He’s done a good job in recruiting and has had a hand in a lot of stuff.

“I feel great with not only the fact that he can teach the way we teach it, but also we need some continuity in that room. Corey is a young coach who has a really bright future. And I think everything — if you put into Corey, you’re going to get back in invest because he’s so bright.”

Dennis has been with Ohio State since 2015, and is not expected to be going anywhere soon, according to Day.

That desire to stay with the Buckeyes is something else that was incredibly appealing to the program as the guy it wanted to take over the quarterback room.

“But when I got in here and Mike (Yurcich) came in, and so now this is the third guy in really three years. And I really want to solidify that room and have some stability in there,” Day said. “I think that was critical, too, because I know Corey is invested in Ohio State and his family. So when you combine all those things together, I thought it was a great hire.”

With Day’s knowledge and experience of the quarterback room, he could have decided to not sign on a new quarterbacks coach, instead taking the responsibility and putting it on his plate.

But the coach, who is now coming into his second year at the helm, thought that would be too much for him to take on, and trusts in Dennis to continue to improve Justin Fields, Jack Miller, C.J. Stroud and company.

“After going through it for a year, it’s very difficult with all the things that come with this job to be in that room all the time coaching the quarterbacks. Certainly involved with the offense. And Kevin (Wilson) is a huge part of what we do on offense. And he’s going to continue to do more,” Day said. “But one of the things, whether it’s special teams, I’m in every special teams meeting with Coach (Matt) Barnes. While that’s going on the quarterbacks are meeting. I want to be able to jump in and out of different things and have the flexibility to do that while the rest of the team is meeting.

“Then on the field, I stay pretty close to the quarterback. That’s kind of how it works. But you certainly need a really good teacher in that room because there’s a lot of teaching that goes on in that meeting room that’s critical.”