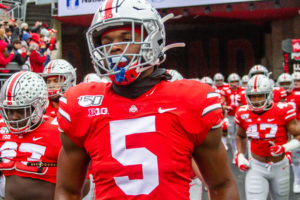 Ohio State heads into Saturday with potentially the most favorable matchup of the season against Rutgers, and the Buckeyes are not taking any chances with players holding potential injuries.

Fourteen players are listed as unavailable for the matchup against the Scarlet Knights, including linebacker Baron Browning, defensive end Jonathon Cooper and wide receiver Austin Mack, all of which have been battling lingering injuries.

Also on the unavailable list is Chase Young, who is serving his second game of a two-game suspension following the reports that came out that he borrowed money while at Ohio State.

At defensive end instead of Cooper and Young remain the four underclassmen of Javontae Jean-Baptiste, Zach Harrison, Tyreke Smith and Tyler Friday, all of whom should get a multitude of snaps on Saturday.

Dallas Gant moves into the No. 2 spot at middle linebacker in Browning’s absence.

Baron Browning, Jonathon Cooper, Austin Mack, and of course Chase Young are among the inactives for Ohio State for its game against Rutgers. pic.twitter.com/NAsKssP9I4