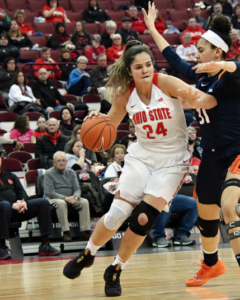 While the Ohio State women’s basketball team welcomed back its top scorer and rebounder Thursday against Illinois, a collective effort fueled by several seniors propelled the Buckeyes to their 78-70 win over the Fighting Illini at Value City Arena in Columbus.

Freshman forward Dorka Juhasz missed the previous two games — last Thursday’s 70-57 loss to Maryland and Monday’s 65-55 triumph at Minnesota — as she recovered from her sprained ankle, returning for OSU vs. Illinois but appearing rusty with three points on 1-of-5 shooting in 18 minutes off the bench.

“We knew Illinois was a good team and it was our chance to get a second win in a row,” Waterman said. “We’re really trying to outwork people at this point. I think that we did that tonight, but we have a lot of room for improvement. I also think that, this team, we know we have to win together. We know that each night’s going to be collective.”

After both sides traded buckets to begin the second quarter, OSU ripped off an 8-2 run for a 27-22 into the 2:43 mark, capped by consecutive makes between Santoro’s three-pointer and layup. Ohio State initially blew its chance to create separation when Illinois closed a 27-26 gap with Ariel Scott’s pair of free throws and Beasley’s layup at the 1:17 point.

The Buckeyes responded by ending the first half with a 7-0 spurt in the closing 57 seconds as they took their largest lead at that point, 34-26, into the locker room.

Behind a 9-3 run into the 6:27 mark of the third quarter, the Illini clawed back as OSU’s near-double-digit lead evaporated to a 37-35 edge. The team traded triples on the subsequent four scoring possessions, but after Ohio State’s pair of free throws from Grande at the 1:45 point to go up 48-44.

With 1:24 left, Illinois stole back momentum behind Beasley’s jumper and Scott’s three-pointer for a 5-0 spurt to put the Buckeyes behind 49-48 into the fourth quarter.

The Illini’s lead was short-lived. After a pair of free throws put Illinois up 51-48, OSU clapped back with a 10-0 run from the 8:47 mark to the 5:41 point and took control of a 58-51 margin. Santoro and Miller converted consecutive three-pointers, followed by Grande’s jumper and freshman guard Janai Crooms’ pair of free throws.

“We were getting a lot of good drive-and-kicks that just created good three-point shots,” Santoro said. “When you step into it and have confidence to knock it down, that’s what we were doing. Adreana hit a couple of big shots and it really propelled us in the fourth quarter. That’s what we needed.”

Illinois stopped the drought on Beasley’s two free throws and cut Ohio State’s lead to 61-55, but the Buckeyes put the game away for good on Waterman’s layup and the foul at the 2:43 mark, going up 64-55 before they sealed their 78-70 final.

“Really important (putting Illinois away),” McGuff said. “Especially because they had dangerous scorers. When they get hot, they get on a roll. They can score the ball with anybody in the league. We really allowed them to get comfortable for stretches in that second half and put ourselves in a tough spot.”

OSU looks to climb the conference standings further Sunday, seeking its third straight Big Ten win at Northwestern (13-7, 6-3). The Big Ten battle against the Wildcats from Welsh-Ryan Arena in Evanston, Ill., is set for a 4:30 p.m. ET tipoff on Big Ten Network plus.